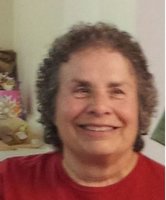 The daughter of the late Oswald and Gertrude Jolie, Diane was born in Exeter, New Hampshire, on April 6, 1945.  She was raised in New England, graduating from Merrimack College in 1967.  She moved to Maryland, where she met Bill in 1974.  They were married a year later and lived in Maryland for another year before relocating to Massachusetts.  They transferred to Northern Virginia in 1993, where she resided until her death.

Diane served for several years in government service, and later as a substitute teacher in both Massachusetts and Virginia.  After retirement, she was very active in the community supporting several civic and social organizations.

A Memorial gathering and celebration of her life will take place on Friday, May 24th, 2019 at Adams-Green Funeral Home in Herndon, Virginia from 5-8 PM.  In lieu of flowers, donations can be made to SOME (So Others Might Eat), 71 O St NW, Washington, D.C. 20001 or online at: https://www.some.org/give/other-ways-give