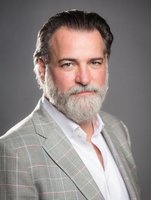 Jeffrey Dale Sessions, 53, of Reston, VA passed away unexpectedly on July 3, 2019 in a tragic accident that also took the life of his beloved wife, Elizabeth Howle.
Jeffrey was born on October 14, 1965 in Boston, MA. In 2004, he relocated to Virginia, where he met the late Elizabeth. They were married on January 5, 2012 and went on to raise three beautiful daughters, all from previous marriages. Jeff also has a loving son, who he made sure to visit as often as he could. Jeff was the CEO of Red River, a company that he helped innovate with his exceptional business skills. Jeffrey certainly lived his life to the fullest, and was looked up to by many. He will be fondly remembered by his family and his many close friends.
Preceded in death by his brother, John. He is survived by his mother, Linda; sisters, Janet and Jeane; son, Jeffrey G. and his wife, Hayley; two granddaughters, Hazel and Sage; daughter, Tessa; and two step daughters, Lindsay and Audrey.
Funeral services will be held at 11:00AM Saturday, August 3, 2019 at Trinity Presbyterian Church, 651 Dranesville Rd.Herndon, VA. In lieu of flowers, donations can be made to the Children’s Science Center Lab, 11948 Fair Oaks Mall, Fairfax, VA 22033. The Sessions family will be setting up The Jeffrey D. Sessions Foundation in his honor in the near future. For any questions in regards to this please email sessionsfoundation@gmail.com