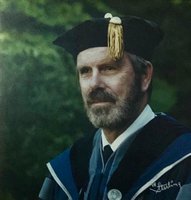 On September 12, 2019, Michael John McKinstry passed at the age of 80 in INOVA Fairfax Hospital. He was born July 15, 1939 in Waterloo, Iowa to John Ogden and Dorothy Virginia McKinstry. Michael was a U.S. Navy Veteran. He received his doctorate in Marine Biology from Georgetown University.

Michael is survived by his beloved wife of 45 years, Patricia Adams McKinstry, his daughters Michaela McKinstry Reyes, Katterina Rowena McKinstry and son-in-law Michael Tony Reyes. He loved science, fishing, snorkeling and traveling and was known as the humorous and intelligent teacher.  Michael leaves behind his two puppies, Suzy and Honey, along with his daughters’ dogs, Lilly and Shelly.

The family will receive friends for the viewing Thursday September 19, 2019 at Adams-Green Funeral Home beginning at 4:00PM, followed by the funeral service at 5:00PM. A private interment will be held at Quantico National Cemetery, Triangle, VA. Before passing, Michael requested that in lieu of flowers, he wanted his family to receive gift cards in his memory.