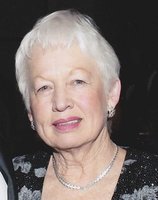 Daughter of Percy Judson and Inez Marie Craft born February 18, 1941 in Covington, VA. Graduated from Central High School, Low Moor, VA and after graduation, she moved to Arlington, VA where she began working for the FBI until she started her family.

Margaret was introduced to Tony on a blind date arranged by her future sister-in-law Diana. While Tony tried to convince her to marry him on their first date, it wasn’t until after several other attempts that he finally convinced her and they were married on April 22, 1962. They resided in Arlington, VA until April 1966 when they moved to Chantilly, VA and raised their children David and Donna. In 1995, they were blessed with their first grandchild Ellen. Walker joined the family two years later and from that time on she was lovingly referred to as “Meeko”.

Margaret was a member of Pender United Methodist Church since 1968 during which time she was a member of the Bessie Gooding Circle where she made many close friends that she considered family. She was the biggest supporter of both her children and grandchildren’s sports and other activities and one of the best cooks around. We will especially miss her fried chicken and hot fudge cake. Margaret was immensely proud of her family and leaves behind nothing but beautiful memories.

In lieu of flowers, the family requests that donations be made on Margaret’s behalf to either St. Jude Children’s Hospital or Heartland Hospice Fairfax, VA.