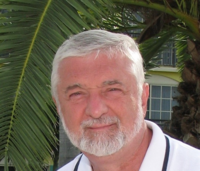 Born on October 21, 1947 in Charleroi, Pennsylvania he was the son of the late Charles Anthony Novak, Sr and the late Hannah Ann Hoffman-Novak.

Chuck worked as an IT Manager for the Federal Government for 35+ years. More recently he was an election officer with Fairfax County Office of Elections.  Prior to his time with the government, Chuck served his country as a member of the United States Navy from 1967-1971 where he received a National Defense Service Medal. He enjoyed spending time and vacationing with this family as well as gardening and landscaping. He was also actively involved in the National Genealogical Society where he was past president of the Virginia Chapter.  Chuck also was instrumental in the creation of Reston Youth Baseball where he served as its inaugural commissioner in 1976 and leading that organization the following years.  He was a faithful servant of Christ and a long-time member of Trinity Presbyterian Church in Herndon, VA holding titles such as Clerk of Session and Elder.  He also had an unbridled passion for the Pittsburgh Steelers, Pirates and Penguins and the West Virginia Mountaineers.

Chuck is survived by his wife of 47 years, Candace, and two children Alan (Jan) Novak and Erin Novak Ritter, four grandchildren, Stacy, Benjamin, Jackson and Nathan. They adored him and were adored by their “Pap.”  Also, he is survived by his brother, Michael Novak (Susan) and two sisters Pam Andrew (Butch) and Debbie Bailey (Ron) as well many other aunts, uncles, nieces, nephews, family and friends.

A final memorial service will be held on Saturday December 21, 2019 at 11AM at Trinity Presbyterian Church, 651 Dranesville Road, Herndon, VA

In lieu of flowers, memorial donations may be made to the Trinity Presbyterian Church Memorial Fund.