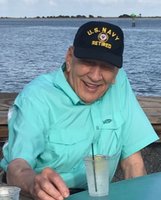 The funeral service may be viewed by clicking here:

John Zachary Baltimore, 85, went to be with his Heavenly Father on January 27, 2021 with his family by his side in his residence in Herndon, Virginia.

John was born on September 24, 1935 in Washington, D.C. to Jesse Robert and Mary Gladys Baltimore.  He attended Western High School, and still remains part of their alumni association.

He served in the United States Naval Reserve from 1954-1965. His service to our country gave him an opportunity to travel and sail the waters that he loved.

John was a Master Plumber with Local Union #5.  He worked his trade for 41 years with W.G. Cornell Company and John J. Kirlin Inc. until his retirement in 1995. He also co-owned, Homeowners Plumbing Heating and Electrical for many years.

In his spare time, John was a devoted boater and fisherman.  Being on the water brought him much jubilation.  In his earlier years, he had much enjoyment as a Boy Scout leader, where he got to spend time with his son on many outdoor adventures.  He played adult softball, and was a member of American Legion Post 184.  He was a faithful member of Epiphany Episcopal Church in Oak Hill, Virginia.  John was a lover of all animals, especially dogs.

John’s pride and joy was the home he built in 1963 for his family in Herndon, Va.  He lived many wonderful years there sharing life long memories with family and friends.

John was preceded in death by his father, mother, two brothers, and many cherished relatives and friends.

A special thank you to Katherine Menassas from Capital Caring Hospice who gave him such loving care.

The family will receive friends on Wednesday, February 3, 2021 from 5 pm to 7 pm at Adams-Green Funeral Home where a service will be held on Thursday, February 4, 2021 at 2 pm.  A private interment will be held at Cedar Hill Cemetery Suitland, MD.

In lieu of flowers memorial contributions may be made in John’s name to: