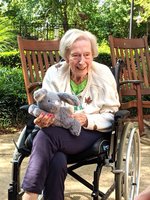 Doris Louis Whalen Gregory passed peacefully into the next life on Monday, July 26th 2021. She was surrounded with love from her family for the 96 years of her life, and all of her children were able to be with her in her last week.

Everyone that met Doris loved her. The Catholic Church was a great source of joy and solace for her, extending her gentle touch beyond family to her church family. Many called her Mom for her great wisdom, understanding, advice, and delightful sense of humor.

Doris was born at home in Syracuse, New York, July 30th 1924. Her ancestry is Irish, Scottish, and Welch. Her father, Leo Arthur Whalen, was an engineer on the New York Central Railroad and her mother, Clara Medbury, was a homemaker, professional baker, and natural medicine practitioner. Doris was the youngest of five girls, and her sister’s reported that she was very difficult to keep up with, as she was so “rambunctious!” Growing up during the depression, she learned many life lessons, that she carried with her throughout her life.

Eastwood High School in Syracuse was where Doris met the love of her life, Edward George Gregory. Ed was second generation Polish and she spoke of how dashing he was, with his fancy car and fun personality.  She enjoyed how he was always making her laugh, and all the fun they had together. Doris loved to dance, and said that when she was young, that she would rather “dance than eat”, and she also loved to sing, and spent her life singing up a storm! Ed and Doris married in January 1945 at Our Lady of Sorrows Parish in Santa Barbara, California, just before Ed was deployed to Japan as a RADAR technician with the U.S. Marine Corps.

After Ed completed his military service, the young Gregory family added a son and returned to Syracuse, NY, to be close to their families. The early years of marriage were difficult but Doris grateful for the support of family, loved being the mom to “junior” and wife to Ed. After World War II ended, jobs were scarce and housing was limited. Ed did find work loading trucks and they lived with Ed’s parents.

In 1947, Ed contracted Polio and the doctors gave him a one-in-one-hundred chance to live. He overcame those odds. The strength and independence of the young family were unmatched. By 1948, Ed regained his strength and slowly returned to work. They lived in government-subsidized housing for two years until able to purchase their first home.

Doris and Ed lived in that North Syracuse home for 18 years, adding a garage, workshop, patio, and screened-in porch. The family also grew and flourished. Doris and Ed had four children: Edward Junior, Cristen, Paul, and Karen. Doris enjoyed her gardening, and had a very large vegetable garden, and flower gardens that surrounded the house.  She was also an excellent cook, homemaker, and was very active in the community, in outreach for the inner city, and always generously giving of her time, love and energy.

Ed was an engineer at Porter-Cable for 20-years. His career flourished and in 1967 Ed received a patent for his design work on the first plastic hand-held circular saw made for the home craftsman.

The Church was a central focal point in Doris and Ed’s life. They were very active in St. Rose of Lima Catholic Church. In the mid 1950’s, at about the same time, Doris joined the Altar and Rosary Society and Ed joined the Holy Name Society which provided a new direction of the spiritual growth for both of them. By the early 1960’s, Doris and Ed joined the Christian Family Movement becoming the “Presidential Couple” representing the Northeastern U.S. for the first international conference.

In 1969, Ed and Doris left Syracuse for Reston, Virginia. Ed got an engineering job at Control Data Corporation (CDC). It was now a family of four: Doris, Ed, and their two children, Paul and Karen. Edward Junior was in the U.S. Air Force and Cristen was in the Navy.

Doris and Ed were founding members of the St. Thomas a Becket Catholic Church of Reston. The church was an essential center for their lives. Ed and Doris built their dream house in Reston. In 1974 , Ed and Doris became  members of the "In the Spirit" seminar , which  profoundly influenced their spiritual lives. They were members for about 23 years until Ed's health problems became more challenging.

Doris worked for Raleigh’s; a premium clothing retailer. Ed retired before Doris as the polio continued to present more health challenges. Doris’ health benefits were essential to the family. The Christmas of 1995 brought the whole family together in celebration. Ed passed away a few weeks later holding Doris’ hand in January 1998.

Always full of energy, Doris continued to contribute to the Catholic Church leading the Life in the Spirit Seminar supporting the parish Catholic Charismatic group.  She also assisted the parish as an Extraordinary Minister of Holy Communion, and providing religious instruction, and other activities such as singing in the St. Thomas a Becket Gospel Choir. For Christmas 2005, Doris presented each of her children with a two-volume hand-written family history: volume one was a history of the whole family and volume two was filled with memorabilia unique to each child.

Memorial contributions may be made to Catholic Relief Services (crs.org) or Catholic Charities of Arlington Diocese (http://arlingtoncatholiccharities.com