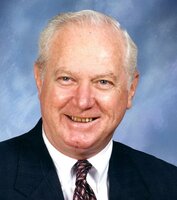 Al or Dooner, as he was known, graduated from Penn State University in 1961 with a B.S. in Accounting and was a member of the Sigma Chi fraternity.  He relocated to Washington D.C. and married Dorothy Sue Remington of Washington, Pennsylvania in 1962, with whom he had three sons.  His career included positions at Honeywell, Electronic Data Systems (EDS), his own businesses United Computer Management and American Driving Clinic, Nordstrom, and lastly as a special education instructional assistant with Fairfax County Public Schools at Lee High School in Alexandria, Virginia. Al was an avid fly fisherman and an active member of The Georgetown Presbyterian Church for most of his life.

He is survived by his three loving sons Kirk, Mark and David Johnson; four grandchildren Kevin, Laura, Hannah and Natalie; one great-grandchild Cayden; and by many dear friends and extended family members who will miss him.

A viewing (from 10:00-11:00 a.m.) followed by a service (11:00-Noon) will be held on Monday, December 13th at The Georgetown Presbyterian Church located at 3115 P Street NW, Washington, DC 20007.  He will be buried next to his parents in Curwensville, Pennsylvania.  In lieu of flowers, memorial donations may be made to The Georgetown Presbyterian Church.