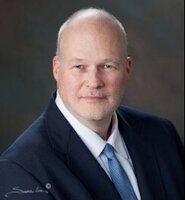 After graduating from Langley High School in McLean, JJ attended and graduated from Virginia Tech in 1986. JJ received his Master’s in Construction Management from the University of Florida in 1987.

JJ was a big football fan and loved rooting for his Hokes, Gators and Dallas Cowboys. And in recent years, he became a big Liverpool fan as well.

JJ was an avid researcher of his family ancestry and enjoyed traveling, especially loved visiting Belgium and Ireland.

Often described as a kind and gentle giant, JJ was loved and will be missed by many.