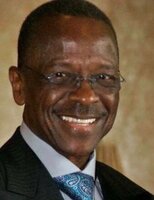 A husband, father, pastor, and friend, Charlie lived and loved well. Whether serving in the Air Force, playing softball or racquetball, serving in church ministry, or just enjoying a meal with others, he cultivated an atmosphere of safety and love that earned the trust of those around him.

Due to the extent of Dad's influence, and the ongoing challenges related to gathering large groups in person, we invite you to a virtual service to celebrate his life.

(Instructions to download Zoom prior to service day and joining the virtual service at 11:00am EST on Saturday, February 12, 2022 can be found by clicking the VIEW SERVICE button above.)

A TIME TO BE BORN

Charlie Henry Harris was born on November 12, 1938 in Leslie, Georgia. He was one of eight children born to Johnnie Lee Harris, Sr. and Ruthie Florence Harris.

A TIME TO EVERY PURPOSE UNDER THE SUN

He spent his formative years in St. Petersburg, Florida, then moved to Roselle, New Jersey, in 1944 before settling in New York City with his parents and siblings. He enjoyed sports and singing in a gospel group. His life-changing Christian experience began in 1953 at New Jerusalem Holy Church in Manhattan. He also enjoyed serving as an usher, president of the choir, youth leader, altar worker, Sunday school superintendent, and teacher. After graduating from the High School of Commerce in 1956, he enrolled at Pace College, majoring in accounting.

In 1956, after a gospel music program in Brooklyn ended late, Charlie’s friend asked him to make sure someone got home safely. That someone was Doris Elaine Harris. He connected again with her in December 1956 at a mutual friend’s birthday party during a friendly game of spin the bottle. The following year, he disenrolled from Pace College due to financial difficulties and enlisted in the Air Force. But Charlie would tell you the most important event of that year was marrying his sweetheart Doris on July 28th. They went on to have four children: Charles Henry, Jr., Wanda Deann, Michael Brian, and Paul Christopher.

Whether serenading his wife in song, coaching his son’s little league team, being an enthusiastic dad in the stands, or teaching his children how to drive, he always endeavored to be sensitive to the unique nuances and needs of his wife and children throughout their lives.

He extended this same sensitivity to everyone he met. Whether serving in the United States and abroad while in the Air Force, playing softball or racquetball, serving in church ministry, or just enjoying a meal with others, he cultivated an atmosphere of safety and love that earned the trust of those around him.

In 1975, Charlie, then a minister and evangelist, accepted an invitation from Morning Star Baptist Church (now Morning Star Full Gospel Assembly) to pastor the congregation. In August 1977, he was ordained by the Greater Emmanuel Apostolic Faith Tabernacle, Inc., and received his Bachelor’s degree from Adelphi University in 1978. In February 1979, he retired from the Air Force after twenty-two years of distinguished service in order to devote himself fully to his congregation of fifty people.

He loved learning and particularly enjoyed studying and teaching the Bible. His heart was to see everyone, no matter their walk of life, experience the presence and power of Jesus Christ. After three years of full-time study at Long Island Bible Institute in New York, he graduated as valedictorian with a diploma in Theological Studies in May 1983. He subsequently enrolled in a clinical pastoral education program at Bellevue Hospital, where he served as an associate chaplain. From 1990-1992, he also served as Protestant Chaplain at JATC Riker’s Island Correctional Facility, as the church continued to grow. On August 16, 1998, he was consecrated to the Bishopric. With a congregation of over 600 members, in 2014 Bishop Harris passed the pastoral baton to new leadership and served in an emeritus capacity as an advisor.

A TIME TO DIE

A TIME TO MOURN

In lieu of flowers, the family prefers donations be made to the Bishop Harris Children's Ministry Fund. All donations will support the children’s ministry at Morning Star Full Gospel Assembly in the Bronx, NY. Thank you.