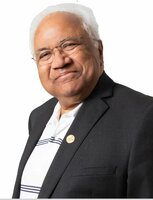 To view the LIVESCREEN press here:

Veer Vrat Bhartiya was a devoted family man, a loving husband, a dedicated father, a jolly friend, and a remarkable businessman who led with his heart and his intuition. His fantastic adventures on this Earth came to a close on March 21, 2022, at age 73.

Veer was born to Vimal C. Manav and Shanti Devi in Haryana, India as the middle child of 7 children. As a child, he was a rebellious prankster in a very conservative and lower-class family who was able to make his siblings laugh and feel comfortable despite their challenging upbringing. He was also gifted with a great mind. His academic aptitude allowed him to secure an extremely rare scholarship from the Indian government to earn his master’s degree at either Stanford or MIT. He chose MIT.

His magnetic charm, generosity, and jovial nature made him instantly likeable in Boston. He would host any student – even strangers - arriving in Boston to stay in his apartment until they were situated. He was the Indian Student Association president, admired by many for his integrity and compassion, and the center of many parties and campus theater events. Upon his return flight to India, he was escorted by his peers with a parade-like spectacle all the way to the airport.

As was customary then, Veer sought an arranged marriage. However, he was never one to take life or it’s big moments too seriously. His first interaction with his future wife’s family involved him showing up to the meeting late (this would be a habit throughout his life) and dressed only in a ‘lungi’ or Indian pajamas. He then had the audacity to declare “The candidate is here.” Luckily, his intelligence, charm, and warmth won the day and the heart of his future wife, Purnima.

From an early age, Veer had vowed to make it to America. He eventually convinced his new bride Purnima to take a leap of faith with him. Without a job waiting for him or even a place to live, he followed what felt right to him. Together with their newborn son, they found their way in a new country. There, the family put down roots in the Northern Virginia community and led busy social lives filled with music, dancing, laughter, and countless speeding tickets.

The first several decades in the US had their own unique challenges though – living in a joint family, attempting to start a new business aligned with his goals and values, and raising a family in a foreign country. But through sheer brute force, an unflinching focus on delivering quality, and a little luck, the company he built survived. It was not uncommon to find Veer fixing the broken leg of a desk or carrying supplies from office to office, even as CEO of a growing company. Service was in his soul.

With Veer’s vision and fortitude, REI Systems is now a thriving enterprise with nearly 1,000 staff across the world. It is a company that embodies all the principles he holds dear – integrity, quality, hard work, and service to others.

Veer believed that life was meant for living, for giving, and for loving. As he transitioned into retirement, he sought to give back by establishing a medical center in India to provide free healthcare services to those in need – just like his own family so many years earlier. His profound impact will live on for generations.

His ferocious love for life’s beauty and pursuit of joy lives on through his wife Purnima, his sons Wagish and Manish, his daughters-in-law Resmi and Shwetha, and his three grandsons.