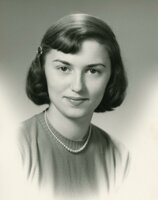 Loving wife, mother, and Babcia (grandmother) Louise Fues made her journey to join her beloved husband, Jay, in Heaven on April 24, 2022. She leaves behind a loving family and friends and the memory of a life well-lived.

Louise began her early years in Boston as a proud and blessed member of a large, extended Polish family. Like her family before her, Louise knew the importance of dedication and hard work.  After graduating high school at only 17 years of age, she studied at Boston City Hospital School of Nursing and earned her RN degree 3 years later. In 1954 she began her nursing career and met the love of her life, Jay.  Their 64-year journey together began in Boston. Shortly after meeting, they moved to San Antonio for Jay’s service with the U.S. Air Force. Louise continued her calling as a professional nurse until they started a family together.

Louise and Jay’s next adventure began when Jay started working at Texas Instruments. Jay’s T.I. career would bring their family to Dallas, Texas; Bedford, England; Freising, Germany; Campinas, Brazil; and Houston, Texas. In the 60’s and 70’s expat assignments were uncommon—especially with three young children. But Louise considered living overseas to be a blessing, a way to make new friends and a wonderful opportunity for her family to experience the world. After retiring from work, Louise and Jay moved to Northern Virginia to be closer to family.

Louise—the so-called “Cookie Lady”—was an expert baker who specialized in Christmas cookie creation, often baking 20+ varieties of cookies with her daughter, Lisa, every holiday season. Louise will long be remembered for her kindness, enthusiasm for life, and her steadfast devotion to her family and her friends. She really, really cared for others and did her part to make the world a better place. Babcia’s faith was forever strong, and she is now at peace with God.

Louise’s daughters-in-law considered themselves beyond fortunate to have Louise as a mother-in-law. She was loving and welcoming from the moment we met her, and we cherished our time with her. We admire the relationships she created with each of her children and grandchildren and hope that we are able to do the same.

Louise was a breast cancer survivor for 36 years, and she worked through the many challenges of macular degeneration for the past ten years while also battling lung cancer for the past several years. In lieu of flowers, she would welcome donations to the charity or faith of your choice. For those with less means, any act of kindness to others would also please Babcia.