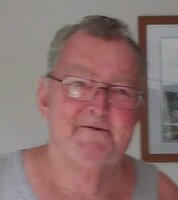 Jesse F. Marr, Jr., was born in Richmond, Virginia, on February 3, 1943, to Jesse and Sarah Marr. He was one of seven children. Jesse loved helping others and retired from Loudoun County Public Schools after working as a head custodian for many years. He also delivered lumber for Dale Lumber Company in Falls Church for many years.

Jesse’s passions included listening to Bluegrass music, watching Westerns, camping, and crafting rocking chairs, cradles, and other small wood furniture. He would also spend countless hours following the migration of hummingbirds so that he could observe their visits to his backyard. His big smile, warm laughter, bear hugs, and kind heart brought happiness and joy to all who knew him.

Jesse was preceded in death by his parents and three of his siblings. He is survived by siblings Nancy, Susan, and Sam, his wife of 59 years, Mary, his three children, daughter Frances Sanderson (Tommy), of West Virginia, son Jessie (April), of North Carolina, and son Robert (Betsy), of Maryland. He is also survived by seven grandchildren and three great grandchildren and dozens of nieces and nephews.

A graveside service will be held on Thursday, May 26, at 2:00 pm at Stonewall Memorial Gardens in Manassas, Virginia.