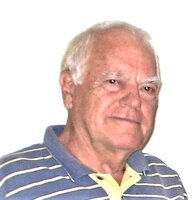 Donald Lawrence Boyle of Ashburn, VA passed away on June 14, 2022.  Don was a resident of Sterling Park and Ashburn for 60 years.  He is survived by his wife Mary, his sons Donald Jr. and Michael, six grandchildren, and two great grandchildren.  Don’s daughter Karen and granddaughter Amy preceded him to heaven.

Don was born and raised as one of five children in Clairton, PA where he worked in the steel mills after graduating from high school.  In 1950, Don joined the US Air Force and worked as a radar specialist.  He was stationed at bases in Newfoundland and Saratoga Springs, NY.  It was while stationed in Saratoga Springs that Don met his longtime love Mary Reynolds to whom he was married for 69 years.

After the Air Force, Don began working as an air traffic controller for the FAA.  During his long career with the FAA, he was stationed in Fairbanks, AK, Washington National Airport, and the Washington Air Traffic Control Center in Leesburg, VA.  Don was a man with a big personality.  He was an avid golfer and loved his grandchildren.