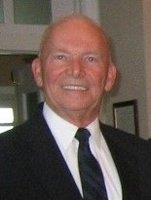 Charles Milton McKinney III peacefully passed away September 6th, 2016. Born in Dallas, Texas in 1940, Charlie grew up in Irving, Texas with his parents and three brothers. After attending Texas A&M and Tarleton State University, he enlisted in the United States Marine Corps in 1961. There he became a specialist and teacher of guerrilla warfare tactics before being chosen to attend the Marine Corps Embassy Security Guard School in Arlington, Virginia in 1964. This was the same year that Charlie met his wife, Eileen, whom he married in 1967. After being stationed as an Embassy Guard in Ankara and Algiers for two years, he completed his BS and MS in Archaeology at American University. Following this, he worked at the Smithsonian Institution, and soon after, began his career at the Interior Department’s Park Service and the Bureau of Land Management. After retiring from the government in 1996, Charlie volunteered for the American Red Cross and the Republican Party of Loudoun County. He served on the Board of Directors at Loudoun Water, and as Commander of the American Legion Post 2001 in Ashburn, where he assisted Veterans in accessing appropriate resources for their needs. Charlie enjoyed his family, public service, and travel with his wife. He was a member of Saint Joseph’s Catholic Church in Herndon, Virginia. Charlie is survived by his wife, Eileen, of 50 years. Also surviving him are his daughters and son-in-law, Rachel McKinney Bartanowicz of Purcellville, Virginia, Allison McKinney Slifer and Michael Slifer of Jefferson, Maryland. Additionally, he is survived by his grandchildren, Max, Dillon, and Jacob of Purcellville, VA, and by Sophie, Lydia, and Jack of Jefferson, MD. A memorial mass will be held on Tuesday, September 13th at 11:00 at St. Joseph’s Catholic Church, 750 Peachtree Lane, Herndon. A military funeral will be held on Wednesday, September 14th at 1:00 at Union Cemetery, 323 North King Street, Leesburg. In lieu of flowers, the family requests that donations be sent in Charlie’s name to the American Legion Post 2001, Box 1243, Ashburn, VA, 20146. Donations will be used exclusively to assist disadvantaged Veterans and their families.