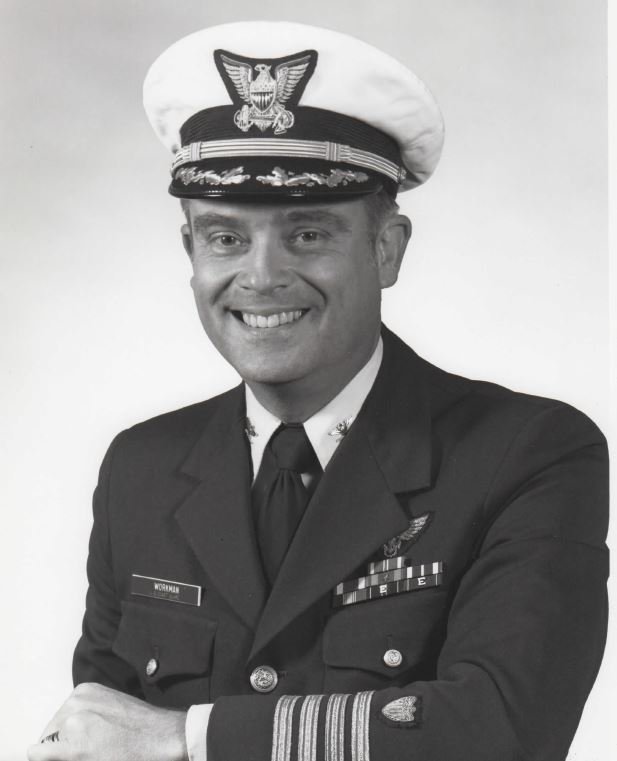 Captain Robert B. Workman Jr., 81, of Long Beach, California, died Tuesday, February 26, 2019 in Ashburn, Virginia. Robert was born August 26, 1937 in Long Beach, California, son of Robert Bruce Workman, Sr. and Virginia Alice Stone.  He attended Woodward Prep School and served in the US Navy before attending the Coast Guard Academy in New London, CT, graduating in the class of 1959. Robert distinguished himself at the Coast Guard Academy as the captain of the pistol range team, which had its best season in C.G.A history under his leadership. He also impressed cadets with his musical prowess and skill on the guitar in “Lonesome Bob and His Columbus Stockade Clan.”

In the Coast Guard, Robert was an expert airman, flying both helicopters and fixed wing aircraft, including the last of the flying boats. His most notable award was the Distinguished Flying Cross, awarded to Robert after a brave and harrowing rescue mission of four adults and two children from a sinking vessel 120 miles northeast of Saint Petersburg, Florida on January 27, 1967. Robert was also awarded many other honors including: CG Meritorious Service Medal, Air Medal with Gold Star, CG Commendation Medal with Gold Star, National Defense Ribbon, CG Expert Pistol Shot Medal with “E” device, and CG Expert Rifle Medal with “E” device.

Robert retired from the Coast Guard in August, 1984 after 30 years of service to the country. In his retirement, he found time to combine his love for his work and country with his greatest hobby by creating large scale model Coast Guard Aircraft for museums around the country. He dedicated over 700 hours to each model he created. He also created wood carvings of the wildlife he saw outside his lake house in Lake Gaston, NC where he and Gail lived in early retirement. Robert also wrote Float Planes and Flying Boats: the U.S. Coast Guard and Early Naval Aviation, published in July 2012 and still available for purchase from Naval Institute Press.

A funeral service ,with full military honors, will be held at 11am September 26, 2019 at the Ft Myer Memorial Chapel with interment to follow in Arlington National Cemetery..