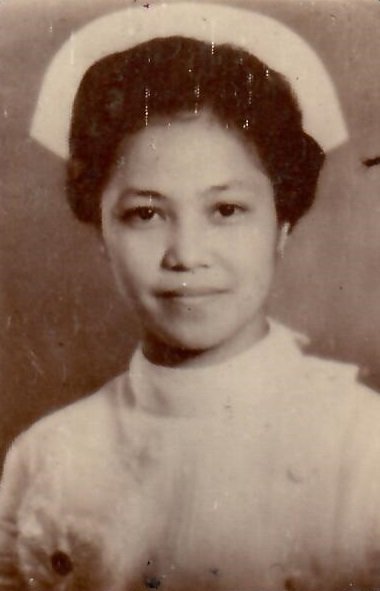 Artemia Bunagan Gumabay, 83, of Cagayan Philippines, passed away peacefully surrounded by her loving family at her residence at Tall Oaks Assisted Living Community in Reston Virginia.

Artemia grew up in Enrile, Cagayan and attended Our Lady of Snow grade school graduating in 1953. She later went to Nursing School in Baguio General Hospital in Baguio City.  She became a school nurse for the Cagayan District Schools early in her career. Artemia than met and married Lucio Gumabay in 1962. She joined her husband in 1964 in San Diego, California where she became a nurse at Mercy City Hospital and later started a family with Lucio. During their blissful years together, they both loved raising a family, gardening and traveling. Together they had 1 child, Albert. During Lucio’s military years, the Navy relocated them to Norfolk, Virginia where Artemia and Lucio lived most of their lives. Artemia finished her career at the Lake Taylor City Hospital where she retired in 1997.

Artemia was the first born in her family and was preceded in death by her parents, Felix and Conseulo Bungan; and her siblings Remigio (Lorenza), Basilo (Carmen) , Cristeta (Rafeal), and William (Arcelia).  She is survived by her husband of 57 years, Lucio along with her son, Albert and two grandchildren Ethan and Kyra. Artemia is also survived by her brother Zazio (Ellenor) along with many nieces and nephews.

A visitation will be held at Adams Green Funeral Home on Friday, April 12th, 2019 between 5:00-8:00 PM with chapel services the following day at the funeral home on Saturday, April 13th, 2019 at 10:00 AM.  The inurnment of cremated remains will be held at a later date at Arlington National Cemetery, in Arlington, VA.

The family will also like to express a special thank you to the Tall Oaks Nursing staff of Sara, Amy, and Nicole and the other hospice staff for their caring of her during her final days and months.

Following funeral services, a luncheon/reception will be held beginning at 11:30 AM at the Amphora Diner located in Herndon.  Detailed information and the address is as follows:

Share Your Memory of
Artemia
Upload Your Memory View All Memories
Be the first to upload a memory!