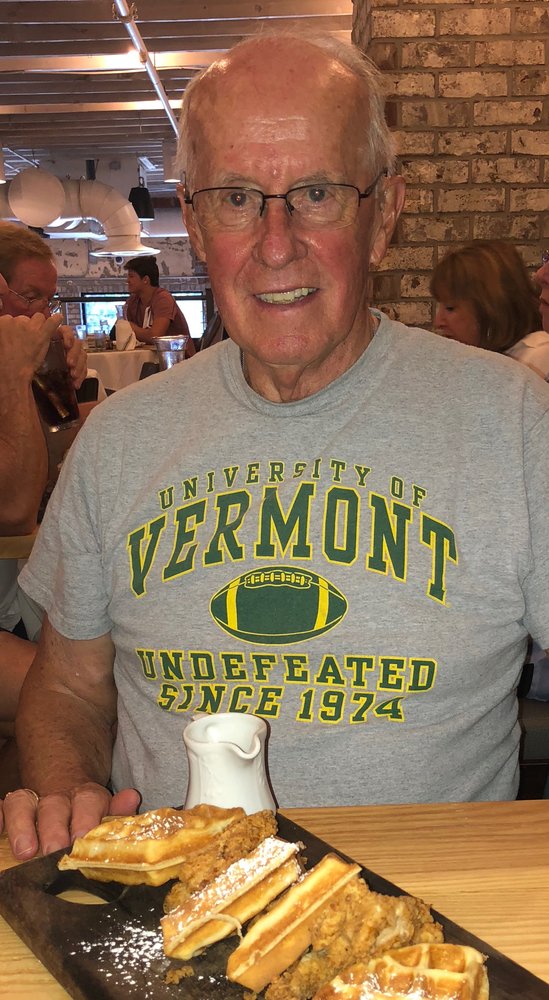 Tom was intensely proud of being born in the great state of New Jersey.  He was raised in a traditional Irish Catholic household which likely accounts for his love of both the church as well as all forms of the potato, particularly mashed.  And let’s not even talk about the butter.  His parents, Mary Lucille and Thomas Joseph Keppel, raised Tom and his younger sister Patricia in Springfield and Chatham, New Jersey.  Tom attended primary school at the Saint Rose of Lima Academy in Short Hills.

Always one to prioritize socializing over his studies, Tom was sent north to Vermont to attend boarding school at Lyndon Institute.  While he did graduate in 1961, Tom’s yearbook entries clearly indicate that he kept his focus on having fun when he arrived in the Green Mountain State. Tom was voted “Friendliest”(no surprise there), and “Best Actor” by his classmates his senior year at Lyndon.  Known as “Peb”, he was a happy-go-lucky friend who really enjoyed the ladies; attributes Tom was always know for possessing.

Tom went on to become a Catamount, attending the University of Vermont where he majored in Engineering and Industrial Management.  He was an active member of the Lambda Iota fraternity where he earned the nickname “Sandman” for his habit of hauling his fraternity brothers off to bed after a night of partying.  According to his best friend Spencer Baker, Tom’s brothers would pretend to comply and then sneak back to the keg.  Little did Tom know at the time, his daughters would later employ similar tactics to thwart his rules, both as young kids sneaking back to watch TV, and as teenagers when according to folklore they may or may not have have snuck out of the bedroom windows.

On a fateful weekend visit home from college, Tom met a beautiful Scottish au pair named Valery at a tavern called Walter’s Two Bars. Val was out-spoken and sharp-witted.  She turned out to be the love of his life.  And when he asked her, she said yes. And so they were married on New Years’ Eve, 1966.  For their honeymoon, the two enjoyed a cross-country drive to Ft. Lewis in Tacoma, Washington where Tom started his service with the United States Army. It was here that their first daughter Jennifer Ann was born.

Retiring from service with the rank of Lieutenant, Tom and his loving wife Val eventually made their way back to the East Coast by way of the Grand Canyon and they settled in Montclair, New Jersey where their second daughter, Melissa Jane, made the family complete.

Following his passion for a career that would allow him to be on his feet and surrounded by people and constant action, Tom joined the Stouffers Company.  Tom managed Stouffers’ flagship restaurant in New York City, the Top of the Sixes.  At Stouffers, Tom demonstrated a keen sense of what the American consumer desired when he wrote to the owner Mr. Vernon Stouffer and informed him that Stouffer’s investment in the frozen food business was a bad move and would never last.  At this moment, Tom’s freezer is chock full of Stouffers meals.  The last Stouffer’s restaurant went out of business in the 90s.  Oh well…

In 1978, the Keppel family moved south to Virginia and settled in Herndon, Virginia where Tom lived out the rest of his life in Herndon.  Sadly,  Val died in 1981 after a brave battle with cancer.  From then on Tom raised Jennifer and Melissa with lots of help from friends and family.  His home was an open door to all of his daughters’ friends, many of whom thought of Tom as a second Dad.  Tom supported Jennifer and Melissa with their academics, hobbies and passions and kept them on the straight and narrow (mostly).

Tom continued to be a shining star in the restaurant industry through the mid 1990s.  Jen and Mel spent more than a few holidays working alongside him including one memorable Easter where they dressed up as the Easter Bunny with their neighbor Ken, most definitely a teenager’s nightmare.  During this time Tom met a lovely lady Ms. Kathy Holmes with whom he shared his life for many years.

In the late 90s Tom traded in the chaos of the hospitality industry for the calm and low-key career of school bus driver.  Not surprisingly, he was a major hit with the kids.  At holiday time and the end of school, Tom’s dining room table overflowed with gifts of coffee mugs and candy from the families that trusted him with the daily task of getting their children safely to school. Tom retired in 2014 and then turned his focus to the things that mattered the most to him, his family and his community.

As a now full-time father and grandfather, Tom took countless trips to Colorado to visit Jen, Michael, Ian and Emma.  During these visits, he had the opportunity to watch Ian and Emma play competitive soccer and to explore the beauty of the Western United States.  Back in Virginia, Tom was a constant presence in Mel and Jason’s life.  Whether shuttling grandson Zack to a Scout meeting or taking granddaughter Lily on yet another shopping spree to Tyson’s mall, Tom was always helping his daughters.  And not because he thought he should, but because it brought him great joy.

When he wasn’t tending to family, Tom was dedicating himself to his civic and church community.  Tom was an elections officer for many years.  He would commit himself to 16 hour days at the polls, not for the politics, but because he could visit with hundreds of neighbors and friends in one day while checking their IDs.  Tom lived for stuff like this.

Tom also spent countless hours supporting church activities. Bringing communion to the home bound members of St. Joseph’s, ushering at mass, or planning the annual church barbeque, Tom was always helping others. Tom truly never met a stranger.  He introduced himself to every waiter who ever took his order.  He made silly faces at all the children he met.  When he met someone from New Jersey, they became his new best friend.  While his daughters were often embarrassed by these outbursts of interest in everyone who walked by, they grew to treasure his gift for brightening the day of everyone he met.

The last week of Tom’s life was the ultimate gift to his family.  He spent it on Anna Maria Island in Florida with both of his daughters and their families. The week was filled with many memory-making moments including reeling in a baby shark on a fishing charter, eating way too much ice cream, enjoying family meals, walks on the beach and quality time with each of us. His family will treasure these memories forever.

Tom lived by the simple rule of “treat others as you would like to be treated.”  He took life as it came even when he was dealt a tough hand.  He never blamed anyone or took offense and always took care of the sick, the lonely, and the forgotten.  Tom will live on in our hearts, minds, thoughts, prayers, and laughs forever.

In lieu of flowers or gifts, contributions in Tom’s name may be made to one the following charitable organizations Tom supported:

Visitations will be held on Thursday, July 25th from 2-4 pm and 6-8 pm at at Adams-Green Funeral Home, 721 Elden Street in Herndon, VA.

A Rosary will be recited at the Adams-Green Funeral Home Thursday evening at 7:00 pm.