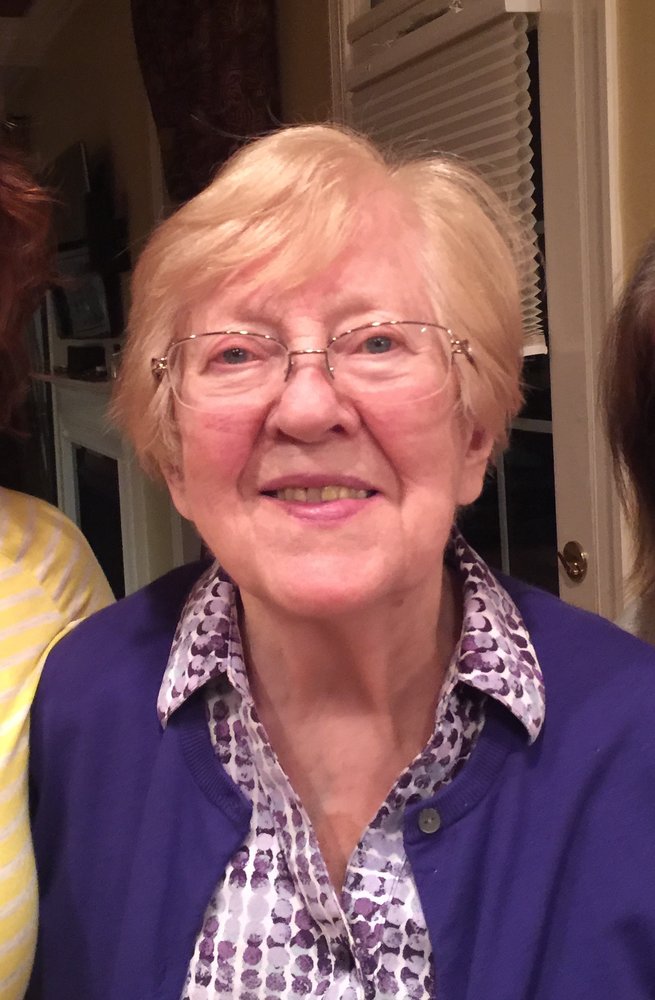 Frances Catherine Unkovic, age 95 died peacefully on September 20, 2019, with her two daughters by her side in Bentonville, Virginia. She was able to celebrate her 95th birthday just days before with close family and friends, and all are eternally grateful to have had that time with Fran.

A public viewing from 5:00-8:00pm, Wednesday, September 25, 2019, will be held at Adams-Green Funeral home, 721 Elden St. Herndon, Virginia, with public rosary at 7:30pm. Her Funeral Mass will be held at 10:00am, Thursday, September 26, 2019 at St. Athanasius Roman Catholic Church, 9201 Leesburg Pike, Vienna Virginia, immediately followed by a Burial Service at the same address. Reception to follow at The Osborne’s Home, 25730 Meadowhouse Ct, South Riding, Virginia.

Fran was born September 15, 1924 in Metcalfe, Ontario, Canada, just outside of Ottawa. Her father, Charles Murray worked in agriculture and her mother Mary Kennedy Murray was a former schoolteacher. She grew up happily surrounded by 8 siblings. As a child she loved to read and was a bit of a tomboy, spending much of the time with her brothers.

She went on to attend secretarial school and secured a position with the Canadian Government. In 1963, she came to the United States as a secretary/stenographer by working for the Canadian Embassy’s Intelligence Unit. She lived in Washington D.C. She met her husband, Charles Matthew Unkovic through a church function at St. Matthews Cathedral. She spent her time actively involved in a multicultural ladies club, Welcome to Washington, as well as enjoying gardening, sewing, knitting and researching her genealogy. They moved to Arlington, Virginia with their two daughters and joined St. Athanasius Roman Catholic Church. She was every bit Irish and loved her Faith, poetry, music, baking homemade bread and spreading stories to her daughters about a bad leprechaun which showed up in the middle of the night. Taking care of others and practicing her traditional Catholic Faith was her gift and she poured her energy into raising her daughters, caring for her husband, and praying for others all the time.

After her husband died in 2003, Fran happily moved to South Riding, VA with her daughter Barbara Osborne, husband and four of her grandchildren for many, many years. In the mornings, Fran could be found making a special “breakfast at Nana’s” before they headed to school. When they returned home the question was “did Nana make anything?” There was a constant flow of goodies from Nana’s kitchen: banana bread, pumpkin pie, lemon pie, apple pie, chocolate chip cookies, and Irish soda bread. She enjoyed teaching her neighbors and children at a local elementary school how to knit. She joined a wonderful group of women in a quilting club called Prayers For Squares where she sewed quilts for those in need of prayers and enjoyed it so much. She also enjoyed discussing politics, traditional values and religion with a close friend.

At the age of 80, Fran developed a love for cruising, which her daughter Barbara was more than happy to assist with. Fran and Barbara traveled all over: Carribean, St John USVI, Disney World, Mexico, Bermuda, Maine, New Brunswick, Prince Edward Island, Quebec City, Montreal, Seattle, Alaska, many trips to visit her family, and Bob’s Lake. Fran and her daughter Carolyn enjoyed traveling to Epcot, Ottawa, Sedona, and Charlottesville.
In March of 2019, Fran began to reside at Hidden Springs Senior Living in Bentonville, Virginia, allowing her to be closer to her daughter Carolyn, her husband and granddaughter, Sophie. Her family is eternally grateful to the staff at Hidden Springs for the loving care they gave Fran during her last few months.

Fran will be remembered most for her strong Catholic faith, traditional values, baked goods and quick wit!

Fran was preceded in death by her mother and father; Charles and Mary Murray and her siblings, Theresa, Isabelle, Lynn, Matthew, Gerald, Bernard, and George.

Fran is survived by her brother, Charles Murray and his wife, Marie Murray who she held very close to her heart. Her daughter Carolyn Frances Sheppard and husband Jeffrey Alan Sheppard and her daughter Barbara Anne Osborne and husband Patrick Richard Osborne. She is survived by five loving grandchildren and played a very active and impactful role in their lives; Meghan Ashley Osborne, Rachel Murray Osborne, Lauren Elizabeth Osborne, Darren Charles Osborne and Sophie Anne Sheppard. She is also survived by many loving nieces and nephews in Canada.

In lieu of flowers, her family has set up the “Frances Unkovic Scholarship Fund” (25730 Meadowhouse Ct, South Riding, VA 20152) for young men and women interested in pursuing a career in geriatric health care, specifically for the employees of Hidden Springs Senior Care, where Fran spent the last months of her life. If you would like to donate to this fund, you can send a check payable to the "Frances Unkovic Scholarship Fund" to the address listed or you may go to the "DONATION" tab found on this website and send your check by filling out the required information on the donation page.

Share Your Memory of
Frances
Upload Your Memory View All Memories
Be the first to upload a memory!