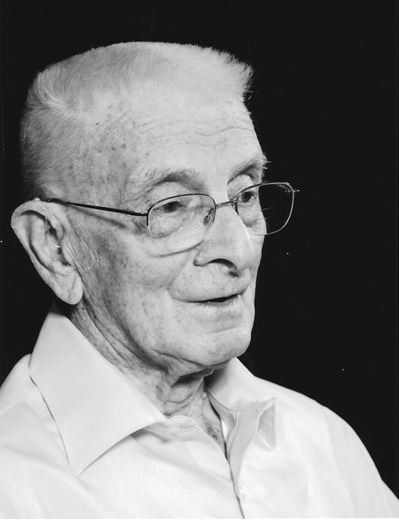 Arthur Dahmer of Ashburn, Virginia (formerly of Fairfax, Virginia) passed away on November 19, 2019 at the age of 94. He was preceded in death by his wife of 70 years, Elsie Stukowski Dahmer, and seven siblings: Kay Spetalnik, Florence Schnegelberger, Hanna Ballman, Ruth Campleman, Herbert Dahmer, and two brothers who died as children. He is survived by his two sons, Doug Dahmer and his wife Julie of Freeport, Maine, and Carl Dahmer and his wife Karen of Seattle, Washington. He is also survived by five grandchildren: Stephen Dahmer, Kirstin Dahmer, Derek Dahmer, Ali Dahmer and Bridget Dahmer, and one great-grandchild, Petra.

Sometimes known as “Red” to his friends, Art was born in the Ironbound section of Newark, NJ to German-speaking immigrants from the Volga region of Russia. He attended public schools in Newark and enlisted in the Navy his senior year in high school. He proudly served in the Pacific Theater as a radioman on the USS BOREAS during WW II. After the war, he worked in the up-and-coming field of TV repair in the Newark area. He married Elsie Stukowski in 1948 and, shortly afterward, they moved to Henderson, North Carolina where he took a position as engineer for the radio station WHNC. In 1953, they moved to Alexandria, VA where Art took a position as an avionics technician for Capital Airlines at National Airport. A few years later he took a similar position with the FAA, maintaining the avionics for their fleet of aircraft. He remained with the FAA in a variety of positions and retired in 1988.

Art was a devoted husband and particularly enjoyed visits from his grandchildren. He was an avid reader and jack-of-all-trades do-it-yourselfer. In his younger years he enjoyed singing in his church choir. And even though it could sometimes be difficult, he was a longtime fan of the Redskins.

He will be interred at the Arlington National Cemetery Columbarium at a future date.

In lieu of flowers, the family kindly requests donations to your favorite veterans’ charity in his honor.

Share Your Memory of
Arthur
Upload Your Memory View All Memories
Be the first to upload a memory!