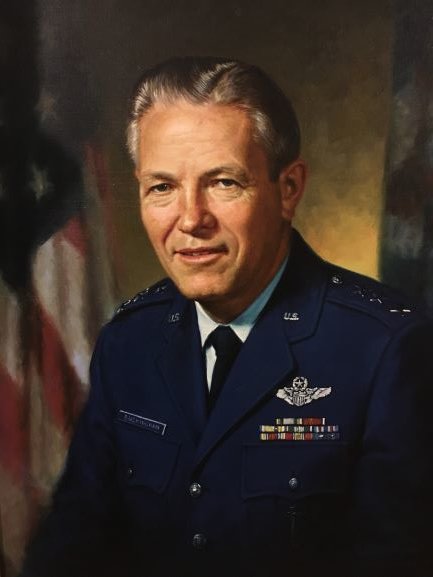 General Buckingham was born in Chicago, Illinois on January 22, 1924. He graduated from Woodruff High School in Peoria, Illinois, and attended Bradley University in Peoria from 1941 to 1943 before receiving an appointment to the Military Academy at West Point, NY through the office of Everett Dirkson, then a representative and later senator. Buck graduated from the Academy in 1946 with a Bachelor of Science degree, and was commissioned as a second lieutenant with pilot wings in the U.S. Army Air Corps which later became the U.S. Air Force.

As a loyal military officer, General Buckingham’s duties included working as a B-29 pilot and instructor, B-36 pilot and weaponeer on the drop aircraft in the Project Ivy nuclear weapons test at Eniwetok, Marshall Islands, and chief procurement officer (Air Materiel Force in Europe).  He earned an MBA from the George Washington University in 1961 and then became Chief of Program Control in the Minuteman System Program Office where he instituted financial management procedures and systems that were adopted Department of Defense wide. He also served as deputy chief of staff for procurement and production and deputy chief of staff for acquisition logistics at the Air Force Logistics Command, at Wright-Patterson Air Force Base, Ohio. He was promoted to the grade of lieutenant general on September 1, 1975 and became Comptroller of the Air Force.  He also served as Chairman of the Army and Air Force Exchange Service and began the process of expanding goods and services for military personnel worldwide.  General Buckingham received the Air Force Association's General Thomas P. Gerrity Memorial Award for Logistics Management.  Other decorations and awards include the Distinguished Service Medal, Legion of Merit, Air Force Commendation Medal with oak leaf cluster, and the Army Commendation Medal.

As well as a dedicated military officer, Buck was a loving husband and father.  While on a blind date, he met his future wife Gloria Jean Doyle and they were married at West Point, on June 6, 1946.  He is preceded in death by his wife Gloria and is survived by his children Peggy (Jeff) Beyer, James (Carol) Buckingham, Lance (Karen) Buckingham, David (Cindy) Buckingham, and Jon (Kim) Buckingham, 14 grandchildren, 17 great grandchildren and a host of other relatives and friends.

General Buckingham was a natural leader, and in his retirement, was a founding Director of the Air Force Retired Officers’ Community (AFROC) and co-founded the Falcons Landing retirement community in Potomac Falls, VA.  He was an avid golfer and active contributor at River Bend Golf and Country Club for many years and always cherished time with family and friends.

A memorial service will be held on Monday, January 6 at 2:00 p.m. at Falcons Landing, 20522 Falcons Landing Circle, Potomac Falls, VA. Interment at Arlington National Cemetery at a later date. In lieu of flowers, donations may be sent to the Wounded Warrior Project (www.woundedwarriorproject.org).

UPDATE: Interment at Arlington National Cemetery has been scheduled for 9:00am, April 30, 2020.  Guests should arrive 30 minutes prior to service time and meet in the Administration Building.