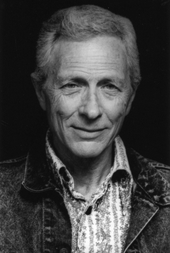 If you met Cal Larson while wandering along a Reston pathway, it’s unlikely that you would come away knowing he was a lawyer honored by both his profession and his community. Instead, you’d know possibly more than you wished about his Washington Post paper route, which he held until his mid-eighties, his penchant for swimming to work most mornings, switching from Speedo to three-piece suit in his office overlooking Lake Anne Village Center, and his large and amazing dog Guinness, who helped deliver the Post and greet clients.

Born on a dairy farm outside of Weyawega, Wisconsin, Calvin Frederick Larson followed his older brother across fields to the neighborhood one-room school house. The Wisdom Ridge School teacher, tired of sending the three-year-old home, finally enrolled him. He headed off to the University of Wisconsin-River Falls at age 15, still following his brother. Enlistment in the Army during WWII put Cal in a special engineering program at Brown University. Summers, his unit picked grapes in California; winters, the soldiers went to Quebec to learn French and how to ski. Armistice took him back to the University of Wisconsin-Madison for a degree in Agricultural Journalism, funded by the GI Bill and work as a sailing instructor on Lake Mendota. He later graduated from the University of Denver Law School, studying nights while maintaining his day job as Public Relations Director of the Rocky Mountain AAA Club and being the best husband and father Utica Street had ever seen.

Like many of their generation in 1951, newly married Cal and wife, Nancy Nugent Larson, were aflame with a sense of obligation to both their parents, who had shepherded them through the Great Depression, and their peers, who had died on foreign fields fighting to defend Democracy. They moved to Harvey Park in Denver, Colorado, then a brand-new subdivision with “cookie cutter” tract homes built for young families funded by the GI Bill and now considered a historic niche of award-winning mid-century modern homes. Soon they were actively lobbying for libraries, schools, and street lights in an area where 4,000 homes were built without normal urban amenities in three quick years. The Larsons also fought to integrate Harvey Park, fiercely committed to diversity of race, ethnicity, and religion. Cal was an early president of the Harvey Park Improvement Association and his daughter, Sarah, remembers overhearing a phone call during which her father, with increasingly colorful language, explained that neither he nor the association would organize a protest against a newly arrived African American family. Cal was named Southwest Denver Citizen of the Year in 1965.

Cal and family moved to Reston, VA in 1967, attracted by founder Robert E. Simon’s vision of a community where one could work, live, and play, traveling more on pathways than on streets. Reston was a planned New Town, the first open community built in the South since the Civil War. And it suited the Larsons to a T. Those awards that so embarrassed him form a map of Cal’s enthusiasms and passions. The Reston Community Association’s Citizen of the Year. The Chamber of Commerce and Reston Interfaith Best of Reston Award. The Whitman Walker Award for Cal’s weekly treks to Alexandria, VA to meet with HIV/AIDS clients, while Nancy sat reading in the car. The James Keith Public Service Award, given by the Fairfax Bar Association for Cal’s pro bono work at the Whitman Walker Clinic and with those in homeless shelters, as well as for civic work in Reston. Perhaps the strangest sounding award was Cal being named Lord Fairfax, along with Nancy as Lady Fairfax, for civic activism.

Cal was a founding member of the Reston Music Center, a program that brought gifted teenage musicians to Reston for summer camp studies with master musicians. His daughters spent the summer setting up chairs on Lake Anne Plaza for the many, many outdoor performances. Cal was also a founder of the Reston Community Association and served ten years on their Planning and Zoning Committee, collaborated with fellow Reston activist Embry Rucker to have Lake Anne Village Center designated as an historic district by the Fairfax County Board of Supervisors, was on the Pathway Committee of Reston Association and helped map pathways in an effort to link them throughout Fairfax County.

He was a great proponent of local cultural events and for decades enjoyed season tickets to Center Stage at the Reston Community Center. He adored outdoor concerts, particular those at Lake Anne Village Center, which he could hear while dining on his very own balcony having what his bonus granddaughter referred to as “The Dinner Romantic” with wife Nancy.

Cal was known for his letters to the editor, faithfully published by the Reston Times and Reston Connection, back when newspapers were our primary news source. One of his most popular letters spoke to a controversy over whether the Reston Homeowners Association should continue to provide access to a local gym. Cal encouraged readers to remove their clothing and stand in front of a mirror prior to deciding how to vote. Until his death, Cal remained a noisy advocate of exercise and took great pride in being one of the more fit participants in a longitudinal study on healthy aging run by Johns Hopkins.

But most of all, Cal loved children, especially babies. Throughout his life, he served as formal and informal mentors to a wide variety of kids, taking them hiking and to the beach and to school when they missed the bus. He was part of a mentoring program in Denver that matched youthful minor offenders with lawyer buddies. And he happily spent his final days in a household in which the eldest was 96 and the youngest 2.

A memorial service for Calvin Larson will be held Saturday, January 4, 2:00 pm, at St. Anne’s Episcopal Church, 1700 Wainwright Drive, Reston, VA 20190, followed by a reception in the church’s Great Hall.

Share Your Memory of
Calvin
Upload Your Memory View All Memories
Be the first to upload a memory!