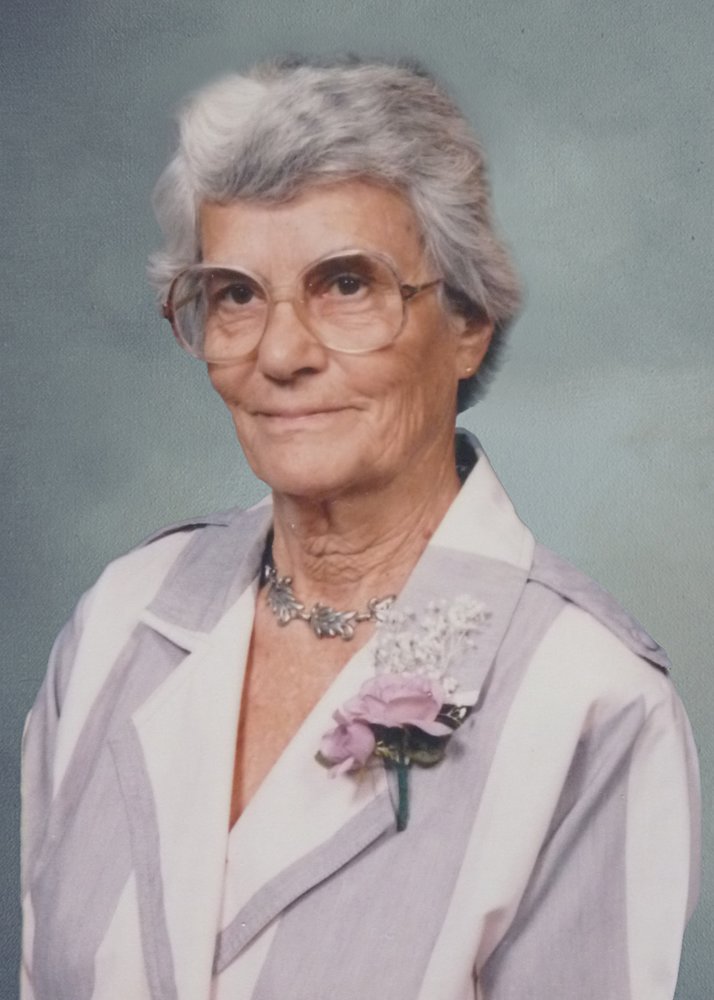 Reception immediately after the service at church until 1:30 PM.

Barbara was born on October 27, 1922 in Cambridge, MA, to Thomas M.B. Hicks and Mildred Todd Hicks.  She married Reuben Martt Harding in 1942.  Following WWII  they lived in Morrisville, NC until they moved to Herndon in December 1950 and raised five children: Martt, Todd, Howard, Susan, and William in the family home at 730 Jackson Street.

Teaching and socializing young children was her first love. Barbara founded Harding Hall in 1951, after seeing that there was no local facility for preschool children. Harding Hall operated as a preschool, kindergarten and daycare facility in the family home until 2003 when Barbara retired at the age of 80.  She was pleased to see the former family home continue as a school for young children, first as Al Fatih Academy and currently as the Montessori PeaceSchool.  In the early years she also taught ballet and tap dancing and ran a Cub Scout pack.  She earned a degree from American University in Early Childhood Education in 1969, and taught Kindergarten and First Grade at Herndon Elementary School for 19 years.

Barbara (known as “Barby” to family and friends) and her husband Martt (“Red”) had an avid interest in English Country Dance.  Both were active in the national English Country Dance Society and, with family members, attended the Christmas Country Dance School in Berea, Kentucky, every year from 1952 to 2012. Barbara was on the faculty at Berea College for a year (in 1981-1982) while she was the interim director of CCDS and was a member of the CCDS Board of Directors Policy Committee from 1981-2003.  In Herndon she taught English Country Dance and English Ritual Dance for many years, and was especially keen on developing Morris and Sword teams for youth in the community while teaching in the school system. As a musician, Barbara sang and played organ, piano, and accordion. For many years she led the children’s chorus of Christmas songs at the Herndon Christmas celebration.

Through her association with Berea College Barbara was one of the founders and organizers of the Danish-American Exchange which came to be headquartered in Berea.  Starting in 1971, Danish folk dance groups have visited the US and American folk dance groups have visited Denmark, always staying in host families’ homes. Barbara’s own English Country Dance group, the Old Dominion Dancers (formed in the 1970's) traveled to Denmark many times, and hosted many Danish dance groups in Herndon.  She leaves many dear, old friends in Denmark, and in the local area.

Barbara has been an active member of St.Timothy’s Episcopal Church since the early 1950s, serving as director of the Junior and Senior Choirs, organist in the 1950s and 1960s, and Treasurer in later years.  Barbara was a very loyal member of Herndon Rotary Club since 1989.  Over the years, she has received many awards for service to her community and was honored as Herndon Citizen of the Year in 1970.

Barbara was preceded in death by her parents, her husband Martt, brothers Warren and Thomas, and sister Persis.  She is survived by her five children, 7 grandchildren, and 14 great-grandchildren.

Visitation will be at Adams-Green Funeral Home (721 Elden Street, Herndon VA) in two sessions on Tuesday, December 17 from 2:00 – 4:00 PM and from 6:00 – 8:00 PM.  The funeral service will be held on Wednesday, December 18th at St. Timothy's Episcopal Church (432 Van Buren Street, Herndon VA) at 10:30 AM with reception and interment at Chestnut Grove cemetery to follow.  In lieu of flowers, donations may be sent to the CCDS Frank Smith Scholarship Fund ℅ CCDS, 309 Jackson Street, Berea, KY, 40403.