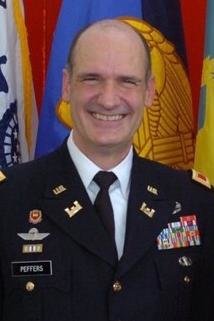 Michael Peffers passed away on the morning of January 3rd at the age of 59 after a three-year battle with neuroendocrine cancer, which he valiantly fought with grace and determination. He was born in Wiesbaden, West Germany where he lived for eight years, cultivating his love of travel and history while exploring Europe during those childhood years. He moved to San Antonio, Texas in 1969 and excelled in academics, competitive swimming and cross-country running. Mike attained his Eagle Scout rank, attending the National Scout Jamboree, Wilderness Canoe Base, and backpacking at the Philmont Scout Ranch.

After graduating from Robert E. Lee High School in 1978, he accepted an appointment to the United States Military Academy. As a West Point Cadet, Mike, affectionately dubbed “Peffs” by his classmates, excelled on the Orienteering Team leading them to several national championships. He embraced the core values of the institution – Duty, Honor, Country – making lifelong friends whom he considered true brothers. After graduating in 1982, he was commissioned as a Second Lieutenant in the Ordnance Corps and later transferred to the Corps of Engineers. He served in Germany for seven years on active duty rising to the rank of Captain before transitioning to the Reserve Component.

Returning stateside, he settled in the Washington DC area where he held several positions of increasing responsibility in the defense contracting industry. As part of his Reserve duties, he served as a Military Academy Liaison Officer representing West Point Department of Admissions within his local congressional district. As a direct result of Mike’s efforts in recruiting and mentoring candidates, hundreds of young men and women now attend West Point or serve as commissioned officers.

Major Peffers was recalled to active duty in 2003 and served with the 10th Special Forces Group in Task Force Viking as part of Operation Iraqi Freedom. In 2004 he deployed again as the Command Engineer for the Special Forces Central Command overseeing all construction projects throughout Iraq and Afghanistan. In 2008 now Lieutenant Colonel Peffers was recalled for active service with the National Geospatial Intelligence Agency (NGA), eventually rising to the position of Military Executive to the Director of Analysis and Production. Promoted to Colonel, he attended the US Army War College graduating in 2010. He then deployed to a combat theater for a final time, serving as Commandant of Area 82, a 700+ person Joint Intelligence staff at Bagram Airfield, Afghanistan. Colonel Peffers retired from military service in 2012. Over his distinguished career he received numerous medals including the Legion of Merit, Bronze Star Medal, and Defense Superior Service Medal.

Mike’s love of country is evidenced by his long service and contributions to his community and our nation. From Eagle Scout to Cadet to Soldier, he inspired all who knew him with his integrity, dedication to duty, and selfless service. His love of family and friends is revealed through the long-standing relationships he cultivated and he is fondly remembered as the most loyal of friends. He was a voracious reader with a keen intelligence and uncanny memory, and was never far from a map, compass or running shoes.

Share Your Memory of
Michael
Upload Your Memory View All Memories
Be the first to upload a memory!