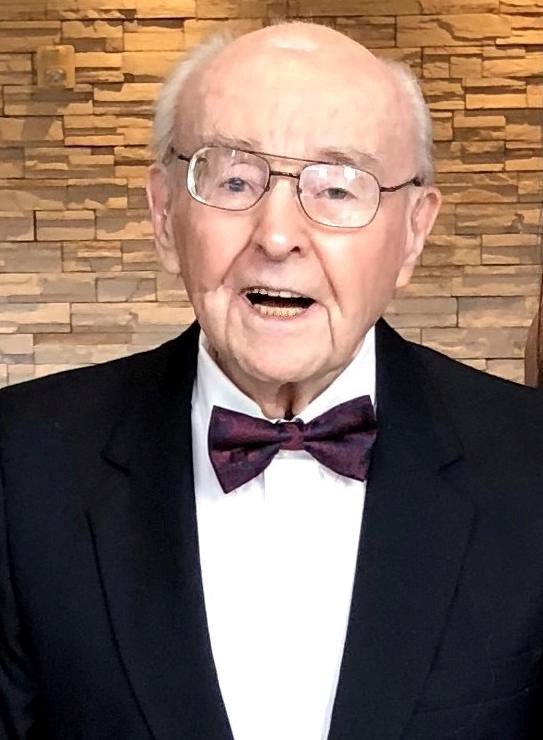 Charles “Charlie” Foster Magee, 96, of Leesburg, Virginia died peacefully on Monday, January 27, 2020 with his youngest daughter by his side holding his hand.

Charlie was born on February 15, 1923 in Rochester, NY to Irish immigrant parents, Sarah Elizabeth Magee (McCardell) and George James Magee, and was the youngest of six children.

He attended St. Thomas Aquinas High School where he was known for his humor column in the school newspaper and chorus. He was a talented singer and won the McCurdy Amateur Hour contest as a young boy. Charlie was also an excellent dancer and knew how to lead. Many women would wait their turn to dance with him at weddings and parties.

Charlie was a veteran of World War II. He enlisted in the United States Navy in 1941 at the age of 18, beginning his training in upstate New York and then in Chapel Hill, NC. He was deployed on the USS R.W. Herndon in the South Pacific with tours of Okinawa, Manilla, and a final mission to the mainland of Japan as part of a planned invasion. The ship turned around after the bombing of Hiroshima and Nagasaki.

After the war ended, he attended Oklahoma State University, where he earned his degree in Mechanical Engineering. After graduation, he worked in the Navy’s Bureau of Naval Weapons, which later became Naval Air Systems Command. He retired in 1982. Charlie enjoyed early-bird swimming at Yorktown High School, boating, golfing, and bridge. He and his wife Corinne lived in Arlington, Virginia for over 40 years before moving to Leesburg. He was a member of the Arlington Knights of Columbus for over 65 years.

Charlie lived a long, healthy life, living independently until just the last few months of his life. He was a dutiful husband caring for his wife Corinne during her lengthy decline in health enabling her to live at home for the last years of her life.

Services will be held at a later date at Arlington National Cemetery. The family requests that no flowers be sent. In lieu of flowers, the family requests donations be made to St. Theresa’s Catholic Church in Ashburn, Virginia for their programs of support for people in need.