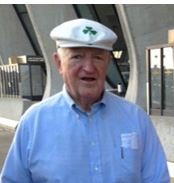 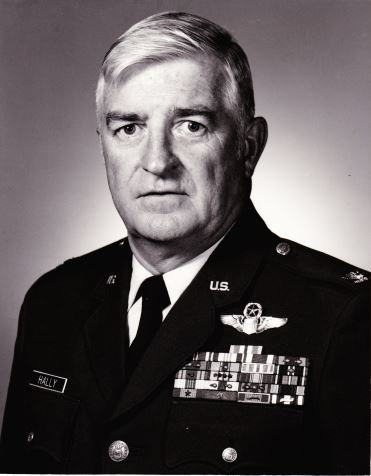 On Feb. 18, 2020, retired U.S. Air Force Colonel Thomas (Tom) Jerome Hally, of Ashburn, VA passed away. He was predeceased by his wife of 59 years, Patricia O’Hara Hally and is survived by their four children; Bridget Hally Graves (Dave) of Charlotte, NC, Moira Hally Cranley (Greg) of Herndon VA, Gretchen Hally Hardtke (Bill) of Herndon, VA and Patrick Thomas Hally (Cherie) of Virginia Beach, VA along with 10 grandchildren and 3 great-grandchildren. Born to John E. and Katherine C. Hally in Rochester, NY, he grew up in Pittsford, NY. He was also predeceased by his siblings John (Jay) and sister Kay Hally Ryan.

Tom graduated from Hobart College in Geneva, NY where he played football on the undefeated 1954 Team of Distinction and was in the ROTC. Upon graduation, he entered the U.S. Air Force as a 2nd Lieutenant and began his long and distinguished career as a Fighter Pilot. His assignments took him to the Philippines twice with duties in Vietnam, Texas, New York and Virginia. He and Patty retired to Florida before returning to Virginia to be near family.

In the Air Force, Tom flew the F-102 fighter jet (“F-102 delta dagger supersonic all weather radar interceptor” as his kids memorized) throughout two tours in Vietnam and completed 328 combat missions. Between those tours, he was instructor pilot at Perrin Air Force Base in Texas, where he began to follow the Dallas Cowboys as his NFL favorite team. He then taught Air Force ROTC at Manhattan College in the Bronx, NY for three years, and was very proud that some of his students made the Air Force their careers and rose to the rank of General. Tom also worked at the Pentagon on the AWACS plane development. He then finished his 30-year career in Intelligence at the Defense Intelligence Agency which included an assignment as the Defense Attache in Manila, Philippines. He was awarded many ribbon awards and medals throughout his exemplary career including the Distinguished Flying Cross.

Tom was a 4th Degree in the Knights of Columbus and an active member of his church. In retirement, he enjoyed travelling with his family and was an avid gardener when he wasn’t attending sporting events to cheer on his grandchildren. Tom was loyal, smart, brave, strong and the loving head of his family. He will be truly missed by many. While his family is saddened by his passing, our hearts are healing knowing he has joined his Patty in Heaven.

The viewing will be on Thursday, Feb. 27th from 5 to 7 p.m. at Adams-Green Funeral Home in Herndon. The funeral mass will be held at St. Joseph Catholic Church on Friday, Feb. 28th at 1 p.m.
Other details may be found at adamsgreen.com.