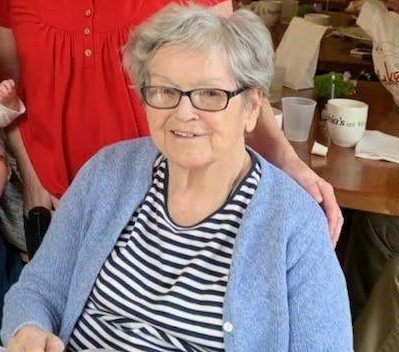 Suzanne (“Suzie”) France Merrill passed away on February 29, 2020, in Ashburn, VA, after a long illness. She was 85. She would have appreciated the irony of dying on Leap Day, and it is nice to imagine her telling stories about this in the afterlife.

Born to Dr. A.M. and Anne France on March 29, 1934, in Prince Frederick, Maryland, Suzanne Seigman France was raised in Parkton, attended the University of Maryland, and married Charles (“Chip”) Francis Merrill in 1955. Suzie had three children and was active in the three communities in which she and Chip lived—Mendham, NJ, Raleigh, NC, and Mechanicsburg, PA—volunteering for the Junior League, the Mental Health Association, the North Carolina Museum of History (for which she co-authored a cookbook), the Pennsylvania Museum of History, the Harrisburg Symphony Gala, and other organizations. She was known for her culinary skills, her storytelling, and her flair for entertaining friends and business associates. She was the life of the party.

Suzie and Chip made a formidable pair on platform tennis courts, winning many tournaments as doubles partners, and they enjoyed playing tennis, golf, and bridge together. She was as devoted to reading as she was to her two cats, Mickey and Mikey. Preceded in death by her parents and her husband, Suzie is survived by her brothers, the Rev. Andrew France and his wife, Dorothy, and Dr. Robert France and his wife, Lana, all of Williamsport, PA; her son, Christopher Merrill and his wife, Lisa, of Iowa City, Iowa; her daughters, Sally Pittman and her partner, Rob Wallace, of Appleton, Wisconsin, and Anne Beltrane and her husband, Greg, of Sterling, Virginia; six grandchildren; and six great-grandchildren.

Donations may be made to the Alzheimer’s Association in lieu of flowers—www.alz.org.

Share Your Memory of
Suzanne
Upload Your Memory View All Memories
Be the first to upload a memory!