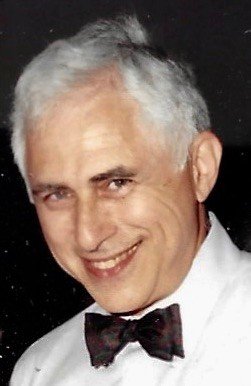 Dan was born on April 12, 1932, in Teaneck, N.J., the eldest of five children of Abe and Ruth (Merzon) Miller. He graduated from Teaneck High School in 1950, and from the University of Illinois, Champaign-Urbana, where he was on the gymnastics team, with a degree in math in 1954. He moved to Santa Monica, Calif. with his first wife and raised four children there and in Woodland Hills. They joined the Ethical Culture Society, taught the kids what it meant to be humanists, and became active in the civil rights movement.

Dan became a systems analyst in the fledgling computer industry, and some years later went to night school to earn a master’s degree in education. In 1974 he left his corporate career and suburban life for the central coast town of Cambria, Calif., where he founded a celebrated restaurant, the Grey Fox Inn. His wife, Shirley, was the chef, and Dan did everything else. Later he wrote a book, “Starting a Small Restaurant” (Harvard Common Press), which he revised and updated twice (the last edition in 2006); it has been used as a college textbook.

Dan’s first marriage ended and he met Leslie Hanna in 1976; they were married in 1978. They enjoyed the first four years of their marriage in Germany, where he resumed his earlier work for System Development Corporation (now Unisys). He and Leslie took an active part in the American community in Bonn, where Leslie started her teaching career. They moved to Virginia in 1983, where they both continued working, enjoying the beauty of Reston’s pathways, lakes, and green spaces. After Dan retired, they lived in California, where he worked with his son-in-law in the real estate appraisal profession.

Leslie’s skills were needed in the Fairfax County Public School system, so they moved back to Reston, this time settling in the Lake Anne area, where Dan then worked for more than fifteen years as an AVID tutor in the local schools, reluctantly retiring in 2019 at age 86 — he so loved those kids.

Dan loved wood, sculpture, artistic expression of all kinds, folk music, the study and cultivation of trees, design and building projects, and really just about everything. He was an artist and musician, with a beautiful singing voice. He was active his whole life, playing tennis until he was 86. His curiosity was endless and he had a legendary memory. His children called him the “Master of Little Known Facts.” He was a talented toastmaster and storyteller; his ability to tell jokes was top-notch and he always cracked himself up in the process.

He was predeceased by his parents; an infant brother, Bernard; his brother Gary; his sister, Harriet; his nephew Robert Skillern; his sister-in-law Wendy Dorr; and a son-in-law, Tobias Brekke. He is survived by his wife, Leslie Hanna (and their 28-year-old parrot, Henry); his children, Becky Adams and husband Burt, Sheree Brekke, Scott Miller and wife Debra, and Michael Miller and partner Teresa; by his brother Ed and wife Teresa Parker; his ex-wife Shirley and husband Bob; and by seven grandchildren, nine great-grandchildren, and numerous nephews, nieces, grand-nephews, and grand-nieces.

Arrangements for memorials are still being made. Please contact Leslie Hanna at lahanna@verizon.net for more information.

Share Your Memory of
Daniel
Upload Your Memory View All Memories
Be the first to upload a memory!