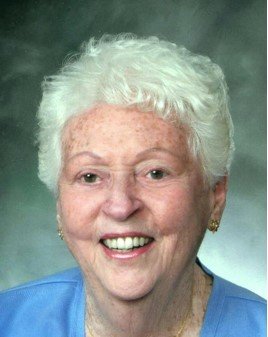 Mary Jane Mengenhauser was born on November 13, 1931, in Haverhill, Massachusetts, and died peacefully at age 88 on April 1, 2020, at Maple Grove nursing home in Ashby Ponds, a retirement community in Ashburn, Virginia. She is survived by her husband Jim of Ashby Ponds, son Jon and daughter-in law Jan, two granddaughters Alexa and Avery, and her sister Katherine Fitzpatrick of Plaistow, New Hampshire. She was preceded in death by her brother Jack O'Shea of Haverhill, Massachusetts.

After two years at Boston University, she lived on Beacon Hill and worked for Cambridge Gas and Electric Company helping customers operate their new gas appliances. Seeking new horizons, she signed up in 1957 for a year's service with the American Red Cross mobile recreation service in Korea and became one of the renowned "Donut Dollies" who brought donuts, coffee, music, and good cheer to soldiers at remote outposts. Her Boston accent was a special treat for soldiers hailing from the New England area. When Jane was stationed at Camp St. Barbara, Korea, she met her husband-to-be Jim, who was an Army Aviator there. After both returned from Korea, they were married at El Paso, Texas, in 1960. From there, they moved to San Antonio for Jim's helicopter school, then to graduate school in Las Cruces, New Mexico, and Boulder, Colorado, for Jim's MS and PhD in chemistry. Their son Jon was born in Boulder in 1964.

A job for Jim at Ft Belvoir brought them to Alexandria, Virginia in 1968. Jane began writing food articles for the The Washington Post, Yankee Magazine, and community newspapers, including The Journal Suburban Group papers. As The Journal expanded, Jane became its food editor for 10 years until the paper ceased publication. Her editorial focus was on the home cook who needed tasty but uncomplicated recipes with reasonable preparation times. She self- published her first book Bake Sale Bonanza: How to Raise Funds Selling Homemade Food in response to seeing a lot of badly run bake sales. Later she wrote The Celibate Gourmet: A Cookbook for Liberated Clergy Persons. It featured recipes “....so simple even a Bishop could use them!” and was intended for priests and nuns who left monasteries or convents to live on their own. Although she was an accomplished cook in her own right, she was always more interested in what other people cooked. If there is a kitchen in heaven, you can be assured Jane will be lifting pot lids to see what’s cooking.

She was a member of Culinary Historians of Washington (CHOW) and the DC Chapter of Les Dames d’Escoffier, a food and wine organization.

Funeral arrangements are a private service at Adams-Green Funeral Home, 721 Elden Street, Herndon, VA, and a memorial service to be scheduled after the corona virus restrictions are ended. Memorial contributions may be directed to your local American Red Cross chapter.