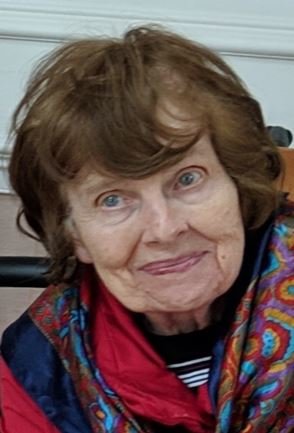 Barbara K Fanslow passed away peacefully in her sleep on April23, 2020.  She was with the kind nurses at Reston Hospital at this time, because she had COVID-19.

She was able to communicate briefly with her family and friends via WebEx and FaceTime while at the hospital.

Barbara was born in Fargo, North Dakota to Eugene and Molly Moll.  She grew up in Minot and Minneapolis, where she met her husband James W. Fanslow.  After she graduated from the University of Minnesota with a degree in early childhood education, they were married on March 26, 1955.

They were in the Air Force and moved to Travis Air Force Base.  They had two daughters and then moved to Albuquerque, New Mexico where their youngest daughter was born.

Their family relocated to various bases and cities, Chelmsford, MA, Simsbury, CT, Endicott, NY and finally to Oakton, VA.  Mrs. Fanslow lived in Oakton, VA for over four decades.  During this time, she spent many enjoyable years teaching The Country Day School in McLean, VA.  Summers were spent working at the State Department.  She was a member of the Emmanuel Lutheran Church, Vienna, VA and the Oakton’s Women’s Club.

A service will be held when she is laid to rest at Arlington National Cemetery at a later date.  In lieu of flowers, the family suggests a donation to the, Michael J. Fox Foundation, for Parkinson’s Research, https://www.michaeljfox.org/donate