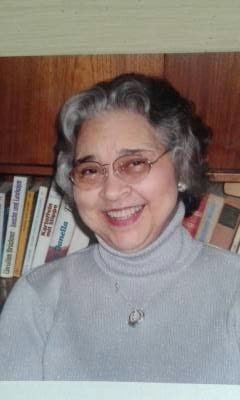 A longtime resident of Reston, Virginia died on April 25th after a prolonged illness at the age of 84.  A native Washingtonian she graduated from Dunbar High School.  Her interest in painting led her to Pratt Institute and Howard University where she graduated in fine arts.  Her mentors were professors James Porter and Lois Jones.  She had a scholarship to the Skowhegan School of Painting and Sculpture.  She won arts awards including one sponsored by the Washington Post.

From 1958-1970 she worked for the federal government as a statistical draftsman and technical illustrator.  Returning to her love of art and children she taught art at the Reston Children’s Center from 1983-1990. Upon retiring she worked as an usher at the Kennedy Center.

Her volunteer activities included serving as an usher at Wolf Trap. A devoted member of St. Anne’s Episcopal Church she served as a teaching assistant on various projects, volunteered at the Closet and with Facets, and was active in the Healing Prayer and Bible Study groups.

Her husband Seabron D. Griffin, DDS predeceased her.  She is survived by her sister Peggy Chapman Witherspoon of Winston-Salem N.C., her son Seabron of Manassas and her daughter Julie of Los Angeles. Her loving grandchildren Alexia, Michael, and Ryan Griffin along with a host of relatives and friends survive her.

Memorial donations may be made to the Clergy’s Discretionary Fund at St. Anne’s Episcopal Church in Reston, Virginia.  She will be inurned at Arlington National Cemetery at a later date.

Share Your Memory of
Catherine
Upload Your Memory View All Memories
Be the first to upload a memory!