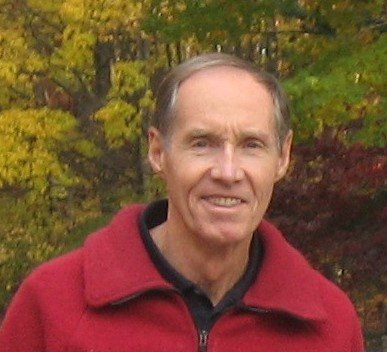 To view live webstream of the Funeral Mass,use this link. saintjn.org/live-stream  It will be available at 10:45am on  Friday, May 8, 2020.

Patrick Michael Brown, age 75, of Reston, passed away on May 2, 2020. Beloved partner of Leslie Stanfield.  Father of Justin Brown. His brother Robert Brown preceded him in death in 2019.  He is survived by his brother Martin Brown of Orland Park, IL, and his brother Donald Brown of Frankfort, IL.  He is also survived by his nephew and niece, Andy and Bridget.

A private funeral mass will be held at St. John Neumann Catholic Church on Friday, May 8, at 11:00 am. Due to the current restrictions, only a very few family and friends will be allowed to attend.  However, the service will be live-streamed and a recording will also be available afterwards.  The link is posted above.

In his professional life, Pat started teaching mathematics on the college level.  After a few years in the education field, he decided to change his career and became an engineer at Mitre Corporation in Houston, Texas.  He worked in technology and was a Systems Tester.  He used to like to say “I love to try to break the system.  And that’s my job!”

Pat’s loving son, Justin, lived with him during his elementary and high school years. As a lucky coincidence, the same year Justin graduated from high school, Mitre found Pat a new job and relocated him to Northern Virginia because the job in Texas had ended.  The company changed its name to Noblis, and Pat worked there until his retirement.

In Pat’s non-professional life, he loved the outdoors.  He liked camping, skiing, running and was an accomplished mountain climber.  He climbed peaks in Europe, South America, and North America.  He climbed Denali twice.  And in Nepal he climbed a mountain called Ama Dablam (not too far from Mt. Everest, but less crowded).  He said that although Ama Dablam is not quite as high as Everest, it is a prettier mountain.

Pat loved running.  In high school, he ran track.  Then in mid-life, he became a marathoner.  He ran over 60 marathons.  He directed the GW Birthday Marathon for DC Roadrunners for 15 years.  He was an active member of the Reston Runners Club. He convinced his partner, Leslie, that she could run more than one marathon and helped her run a marathon in every state.  He missed a few of the states due to work constraints. And was jealous that he “only” ran in 41 states.

Pat was planning on climbing another mountain, going on another hike and a ski trip.  Also, he was trying to figure out how get in those last marathons in 9 more states.

May he rest in peace.

In lieu of flowers, memorial contributions are suggested to his favorite place in the whole world Yosemite National Park - yosemite.org or since he liked to help people, during these troubled times – Cornerstones Food Pantry – cornerstonesva.org.

Share Your Memory of
Patrick
Upload Your Memory View All Memories
Be the first to upload a memory!
Share A Memory