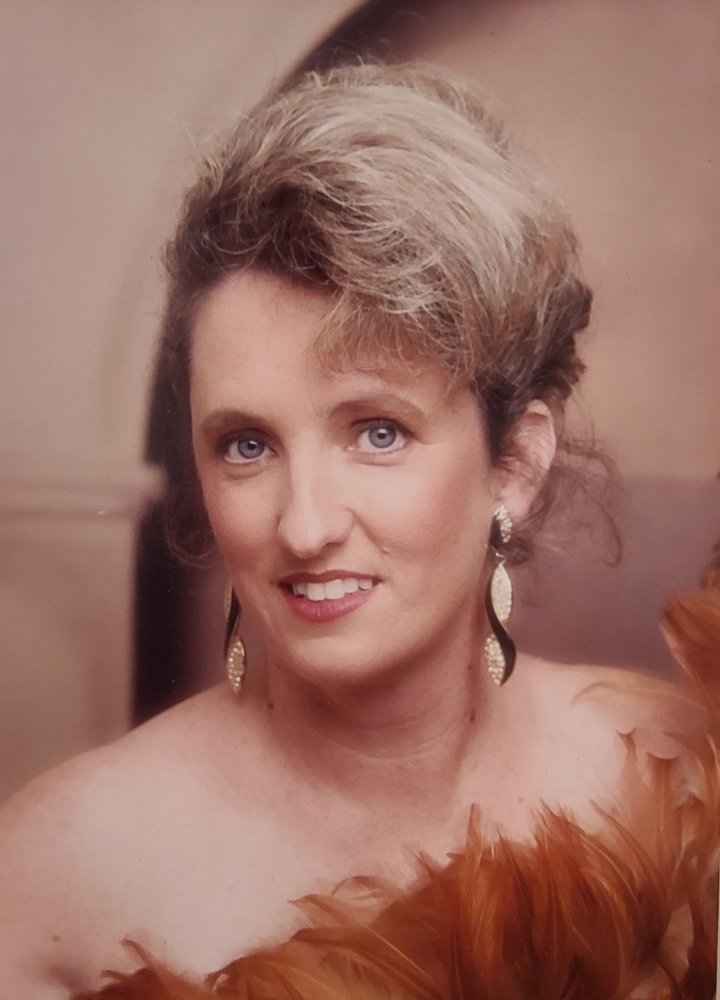 Mary Frances Dunn was born into an Irish American Catholic family in San Diego, California on November 16, 1953. After a four-year battle against Progressive Supranuclear Palsy (PSP), she died peacefully in her sleep at her home in Vienna, Virginia on June 2, 2020. She was 66 years old — far too young.

Before becoming ill, Mary was vivacious, energetic, and full of laughter and wit. A quintessential little sister, Mary, as a young child, tormented her older sister — Kathleen (Dunn) Wellman — and was so proud of it. Mary loved to tell the story of the time she went up to her sister’s date and mimicked how Kathleen danced (it was not a flattering performance). Kathleen got her revenge: she once quartered up an orange, placed the orange in her mouth, smiled, and then chased Mary around the house. Mary was so scarred – she refused to eat oranges from that day forward. She dearly loved her older sister and three “baby nephews” — John Richard, Thomas “Tommy”, and James Wellman.

Mary had a lifelong passion for politics. At Hoover High School, Mary was involved in student body politics and served as class vice president and the Commissioner of Elections, where she successfully petitioned for secret ballot box voting. In the late 1980s and early 1990s after moving to Virginia, she threw herself into politics again, this time as the chief of staff for a member of the Fairfax County Board of Supervisors. Before it was trendy, Mary lobbied against the NRA for reasonable gun control restrictions and organized a citizens’ PAC to lobby Richmond on various issues including campaign finance reform. Mary enthusiastically taught her daughters — Anastasie and Brittany Dunn-Pirio — the importance of political engagement by taking them to political protests in Washington, D.C. and volunteering together on various political campaigns, including Hillary Clinton’s two bids for president. In fact, she did not let her illness prevent her from peacefully protesting in the Women’s March after the 2017 presidential inauguration.

Mary was a polyglot and had a lexicon that could rival any dictionary. Mary soaked up languages. She was a certified interpreter in Spanish and French, fluent in American Sign Language (ASL), and was proficient in many others. She received a B.A. from Scripps College in Spanish and French and a Master degree in Linguistics from UCLA. She used her language skills to help others. In the early 1980s, Mary founded the UCLA medical interpreter services program, improving access to medical care for countless patients. As a second career, Mary taught Spanish and French to college and high school students, including teaching Spanish to deaf students through ASL at Gallaudet University. In addition to linguistic studies, Mary’s intellectual curiosity led her to earn a Master of Planning degree from the University of Virginia.

Mary was the life of the party and threw annual Christmas parties that her friends and family looked forward to attending every year. She made friends wherever she went. She had a knack for bringing people together and did so by founding a women’s book club in the late 1990s. These female friends proved to be a source of great strength for Mary and her daughters during both happy and tragic times.

On July 29, 2001, Mary married the love of her life, Stephen “Steve” Evans. Mary loved Steve’s family as her own and together they worked hard to build a beautifully blended family overflowing with love.  After Steve’s death in 2013, Mary founded the Stephen M. Evans, P.E. Memorial Scholarship. She worked tirelessly year after year raising money for engineering college students and even learned to golf for the fundraiser in his honor. Mary and Steve met each other dancing; now that they are both reunited in heaven, we know they are dancing together again.

Despite being busy with politics, activism, and academics, Mary centered her life around her daughters and always put them first. Anastasie and Brittany remember her as a hardworking mom who always tried her best. Mary was directly inspired by her own mother, Agnes (Smith) Dunn who served as a working nurse and World War II veteran at a time when women did not often work outside the home. Mary taught her daughters that they could achieve anything they set their minds to and encouraged them to succeed academically. She drove hours a day when she was a single mother to ensure that Anastasie could attend a good Catholic high school and tutored to bring in extra income so Brittany could attend the University of Notre Dame. Mary set no limits on what her daughters could do. Although most of Mary’s family lived out of state, she made every holiday and birthday special for her girls. She invited friends to every event and taught her daughters that you do not have to be blood to be family.

The funeral service will be held on June 9, 2020 at St. Thomas à Becket Catholic Church in Reston, VA.  The burial will be held at a later date at Arlington National Cemetery. Expressions of sympathy may be made to CurePSP (www.psp.org) or Lift Me Up! (liftmeup.org).