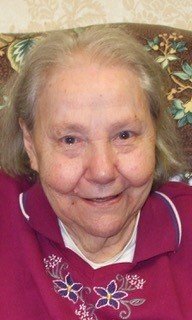 Sylvia Adams Ellsworth, age 100, a resident at Tall Oaks Assisted Living in Reston, Virginia, passed away on July 2, 2020.  Adams-Green Funeral Home, Herndon, is handling the funeral arrangements. Sylvia will be buried in a family plot at Parklawn Cemetery in Rockville, Maryland.

Sylvia was born on March 29, 1920 in Neosho, Missouri, to Ora and Mildred Adams. Later, she moved with her parents and two sisters to Oklahoma.  She graduated from Muldrow High School in Muldrow, Oklahoma in 1937.  She went on to earn a Bachelor of Arts Degree in math and music education in 1940 from Northeastern State College, located in Tahlequah, Oklahoma.

After college, Sylvia taught high school math and music, and directed the High School Band.  When World War II broke out, she joined the U.S. Navy as a Wave.  She relocated to Washington, DC and served in the cartography office of the Navy.  In Washington, DC she met Elmer I. Ellsworth, whom she married on July 9, 1948.  The two raised two children, Sue and Doug, in Kensington, Maryland.  Elmer passed away on February 3, 1979. During a part of her time living in Kensington, she worked as a mathematician for Johns Hopkins Applied Physics Laboratory in Columbia, Maryland and as an elementary school teacher at Alexander School in Silver Spring, Maryland.

Sylvia will be remembered by her family and friends for her strong, unshakable faith.  A faith that allowed her to persevere through the Great Depression, the sacrifices of World War II, and the everyday strains of working while raising two children. She also knew how to have fun and had many adventures. She often regaled her adult children with stories of growing up on a farm, how she was the “boy” her father never had, living during the Great Depression (even eating real crow), and living in Washington, DC as a single woman in the 1940’s.  Her humble, kind spirit will be missed by all who knew her.

Sylvia is survived by her daughter, Sue Ellsworth Tyrrell and her husband Stephen; her son, Douglas I. Ellsworth and his wife Kathryn; her grandchildren, Miranda Tyrrell Hellstrom, Sean Tyrrell, and Karen Ellsworth Danzis; and four great grandchildren.

Share Your Memory of
Sylvia
Upload Your Memory View All Memories
Be the first to upload a memory!
Share A Memory
Send Flowers