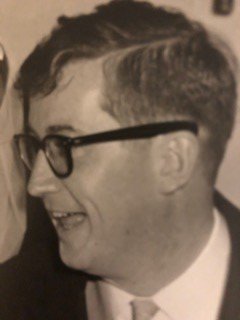 William E. Gavaghen (age 90) of Herndon, VA, passed away on September 12, 2020. Born March 7, 1930 in Brooklyn, New York, Bill was the youngest son of the late Maurice and Caroline Gavaghen. He was preceded in death by his brothers Jack and Michael and by his sister Florence. He was also preceded in death by his dearly beloved wife, Virginia, and adored son, William E. Gavaghen, Jr.

Survivors include his daughter, Moira Wait (Thomas); and grandsons Gavin Wait and Logan Wait (Caroline) as well as a host of family and friends.

Bill was a merchant marine and a veteran of the Korean War. He served as a case officer for the Central Intelligence Agency in Tokyo, Vietnam, Hong Kong and other outposts. In retirement, he sold real estate.

Mass of Christian burial offered September 22 at 11 a.m. at St. Joseph’s in Herndon. In lieu of flowers, donations suggested to the American Heart Association. Condolences www.adamsgreen.com