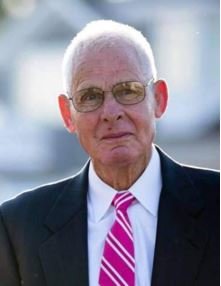 John (Jack) Riester passed away on September 17, 2020 in Williamsburg Virginia.  He was born October 30, 1931 in Auburn, New York to John and Mary Riester.

Jack spent one year at St. Bonaventure University before accepting an appointment to the United States Naval Academy, Class of 1954, 19th Company.  While at the Academy he played football and lacrosse and met his future wife, Jane Stevens from Falls Church, Virginia.  They were married in December 1954.

After graduation, Jack went to Pensacola, Florida for flight training and then to Kingsville, Texas for multi-engine training.  His first duty for five years was flying S2F’s, as an anti-submarine warfare carrier pilot based in Norfolk, Virginia.  He was also his squadron’s Landing Signal Officer. In addition to his bachelor’s degree from the Naval Academy, he obtained a professional engineering license from New York state.

After seven years active duty, Jack transitioned to the Navy Reserves and for over thirty years, he was an engineering supervisor for Eastman Kodak Company in Rochester, New York. Upon Jack’s retirement from the Navy Reserves and Kodak, Jack and Jane moved to their home in Bethany Beach, Delaware.

Jack was an active member and volunteer in his church, coached youth sports, led Boy Scout troops and was involved in many other civic projects.  An avid gardener, he was often found tending to flowers in his yard.  For six years Jack was the Bethany Beach 4th of July Parade Commissioner.  He and his wife spent twenty years delivering Meals on Wheels in rural Delaware.

Above all of Jack’s accomplishments, he was best known for his devotion to God, his family, relatives and friends.  There was nothing that made Jack happier than spending time with his wife, children and grandchildren. He will live on in his family for years to come and will always be known as the legendary “Grandpa Jack.”

Memorial donations in memory of Jack can be made to the National Multiple Sclerosis Society or the Red Cloud Indian School, Pine Ridge Indian Reservation, South Dakota.