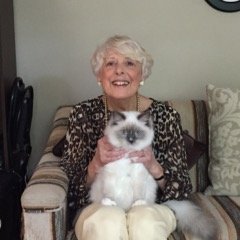 Beryl Joy Hocking, Age 78, of Sterling Virginia,  died on September 24, 2020, after a long fight with Leukemia.

Beryl was born in England on May 21, 1942.  Her parents were Alec & Ivy Morley (both deceased).  Her siblings are sister: Shirley Martin and brother: John Morley (deceased).  Beryl met her husband Jim Hocking (surviving spouse) in January 1961, a USAF Airmen stationed at RAF Mildenhall AFB, England.  They married on December 21, 1963, in the West Row village Baptist chapel.  Beryl joined Jim in a 27 year career ending in 1987.  Beryl was very happy as a military wife, and held various jobs as a bank teller, hospital communication director, supermarket clerk and postal worker.  They were stationed at various locations in Europe and the USA.  Beryl’s great joys in life were being with Jim,  family & friends, her loving pets, her British Wives club members, her canasta playing group, and traveling,— her hobby and great love was gardening.

In lieu of a funeral, It is Beryl’ s wish that her family and friends come together to celebrate her life.  Beryl’s Celebration of Life will be held at a location and date — yet to be determined,  with details to follow.  Instead of sending gifts and flowers the family would appreciate donations placed in Beryl’s name to the Leukemia Lymphoma Society.

Share Your Memory of
Beryl
Upload Your Memory View All Memories
Be the first to upload a memory!
Share A Memory
Send Flowers