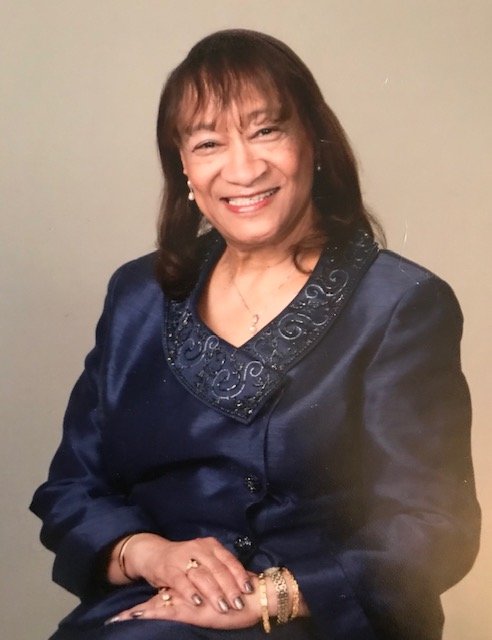 Born to the parents of Curtis and Josephine Johnson, Ruby Jewel Johnson graced this world with her presence on September 27,1950 in Shreveport, Louisiana. While growing up in Shreveport, she attended grade school at Williams Elementary (private school), junior high school at J. S. Clark, and high school at Booker T. Washington. She married, gave birth to her son, Maderick D. Hawkins, the first or two children, in 1967, and moved to Los Angeles, California. In California, she graduated from Emmanuel Arts High School in 1968. Ruby began a career in banking at Bank of America, which she thoroughly enjoyed performing. In 1971, she gave birth to her daughter, Keisha M. Hawkins. As a military wife, Ruby frequently traveled and at one time, called Tucson, Arizona home. There, she made life-long friends and continued to raise their children. Later, the family returned to Shreveport, Louisiana where she continued working in the banking industry, and subsequently added cable television to her skill set. This is when her love for numbers inspired her to major in Accounting at Southern University Shreveport-Bossier where she earned an Associate Degree. She later earned her Bachelor of Science Degree where she majored in Business with a minor in Human Resources.

In 1994, she married Samuel L. Diggs who preceded her in death. The couple moved to Reston, VA in the summer of 1995 and resided in Northern Virginia until her expiration of life. She adored working at Time Warner/Comcast which she worked in that industry for over 30 years before retiring as a member of management in 2010. Just as she lived life, joyfully, on Saturday, December 5, 2020, Ruby transitioned home to be with the Lord, joyfully, listening to gospel music and surrounded by her immediate family members.

Ruby lived life to the fullest... she was a snazzy dresser who loved to travel and have fun. Almost everywhere she went, she was accompanied by her daughter, Keisha. Ruby and her daughter were inseparable. They would often take “staycations” to Williamsburg and Delaware where they enjoyed shopping, air hockey, miniature golf, massages, and relaxing by the pool. Some of Ruby’s most memorable trips were (with her daughter, of course) to New York, Jamaica, The Bahamas, Las Vegas, Florida, Reno, Michigan, and Cancun.

Although Ruby loved to travel, she loved helping others even more; Ruby was a true servant at heart. She never complained about what was going on in her life; she simply continued to exercise her faith in God and lived a life focusing on the needs of others. Ruby volunteered her time helping the homeless, donated clothing, food items, and personal necessities on a regular basis to various homeless shelters, was a loyal supporter of numerous non-profit organizations, and a faithful servant in her walk with Jesus Christ which was demonstrated via her dedication to her church's Usher's Ministry in Herndon, Virginia. She was always trying to help others, so it was no surprise that she developed a passion for helping others 'feel better'.

After researching opportunities and identifying where there were needs, Ruby partnered with a local medical facility to determine the number of individuals who were patients there. She funded and developed a keepsake that she believed would inspire those patients and distributed the inspirational products to the medical facility so that the staff of the facility could extend the products to its patients without disclosing anyone's presence in the facility.

Ruby was special to almost everyone she met; she never met a stranger. Just as her name depicts, she was truly a gem; a delicate soul, but a warrior to the end. She always displayed a positive attitude, which she passed down to her offspring. She was a devoted mother and grandmother... not only to those who share her blood, but to countless others who became, over time, her play daughters/grand-daughters and sons/grandsons.

Ruby leaves behind to cherish:

Preceding Ruby in death are her son, husband, father, and sister (Margaret J. O'Neal). Ruby will be greatly missed by all who love her dearly.

Share Your Memory of
Ruby
Upload Your Memory View All Memories
Be the first to upload a memory!
Share A Memory
Send Flowers