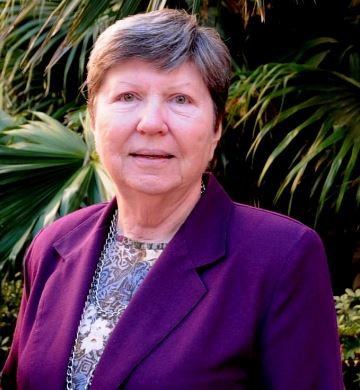 Mary Murton Wilkins of Ashburn, Virginia, beloved sister, aunt, and friend to many, passed on Saturday morning the 27th of February.

Mary was born in Quicksburg, Virginia on October the 4th, 1939 to parents Gilbert F. and Mabel H. Wilkins.

While growing up, Mary excelled athletically in school, and was very involved in her church youth group.  She also developed an interest in music and learned to play the piano, trumpet, and guitar, and played violin in her high school orchestra and the French horn in band.

Mary was inspired from an early age to pursue work in the church, and possessed a self confidence in public speaking and the ability to lead.  However, these aspirations were tempered, as she would need to put herself through college at a time where few, if any, female role models in the clergy existed.

Mary worked in a bank in Washington, D.C., and saved enough to attend Ferrum Junior College, a small United Methodist college in south-west Virginia, where she flourished academically and held several key leadership positions in student government and campus organizations.  It was at Ferrum where Mary participated in a program in which pre-ministerial students preached and conducted worship in small rural churches which were without a regular minister.  This experience confirmed Mary’s interest in entering the ministry.

She subsequently transferred to American University, where she received her Bachelor of Art’s degree in Sociology.  Afterwards, she enrolled in Wesley Theological Seminary and later graduated with a Master of Divinity degree in 1969.  While attending Wesley in 1968, Mary was ordained a Deacon in the United Methodist Church and, as such, was the first female seminary graduate ordained in the Virginia Conference – a true trailblazer paving the way for others.

Following seminary, she was appointed by the Bishop to serve as the minister of two small churches, thirty-five to forty miles south of Washington, D.C.  It was during this assignment, which included working with complex family problems, that Mary became engaged in and developed a passion for pastoral counseling.  This introduced her to opportunities in Clinical Pastoral Education (CPE), and eventually led her to a career with Rush-Presbyterian St. Luke’s Medical Center and later with Swedish Covenant Hospital, both in Chicago, Illinois.

Along the way, Mary’s adventures took her to far away places such as India and South Africa, where she was able to experience new and interesting cultures while sharing her passion for the ministry.

After retirement, Mary returned to Virginia in 2010, where she spent her time engaged in golfing, gardening, and learning sign language while living at Ashby Ponds Community.

She is survived by sisters Phyllis Hughitt and Barbara Bonner, and brother Ed Wilkins, and their extended families.  Mary will be deeply missed by her family, and remembered by a close friend who said “she drives like the devil and preaches like an angel.”

Share Your Memory of
Mary
Upload Your Memory View All Memories
Be the first to upload a memory!
Share A Memory
Send Flowers