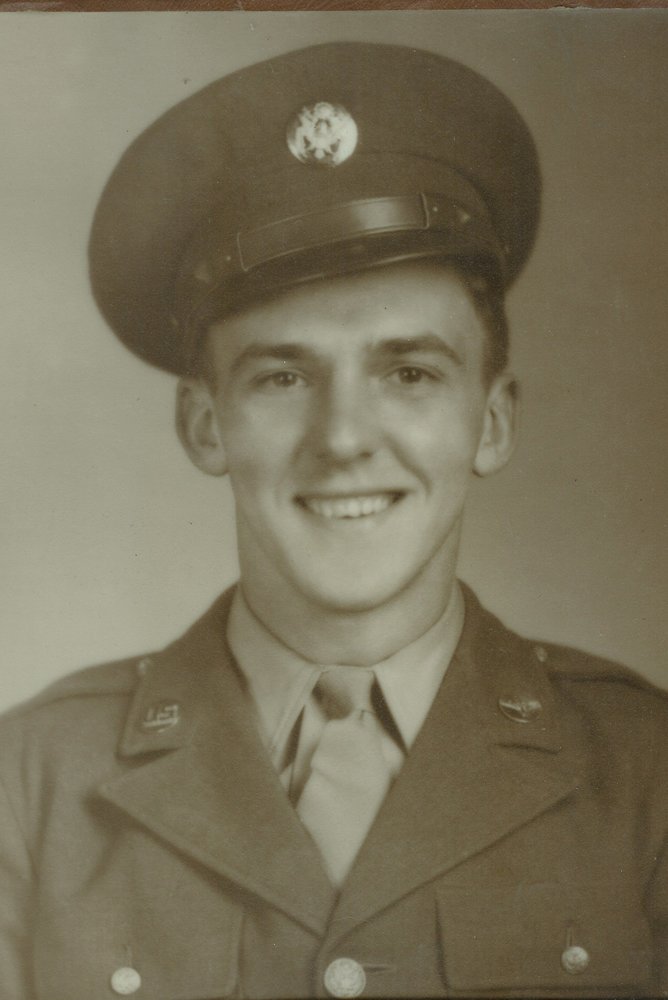 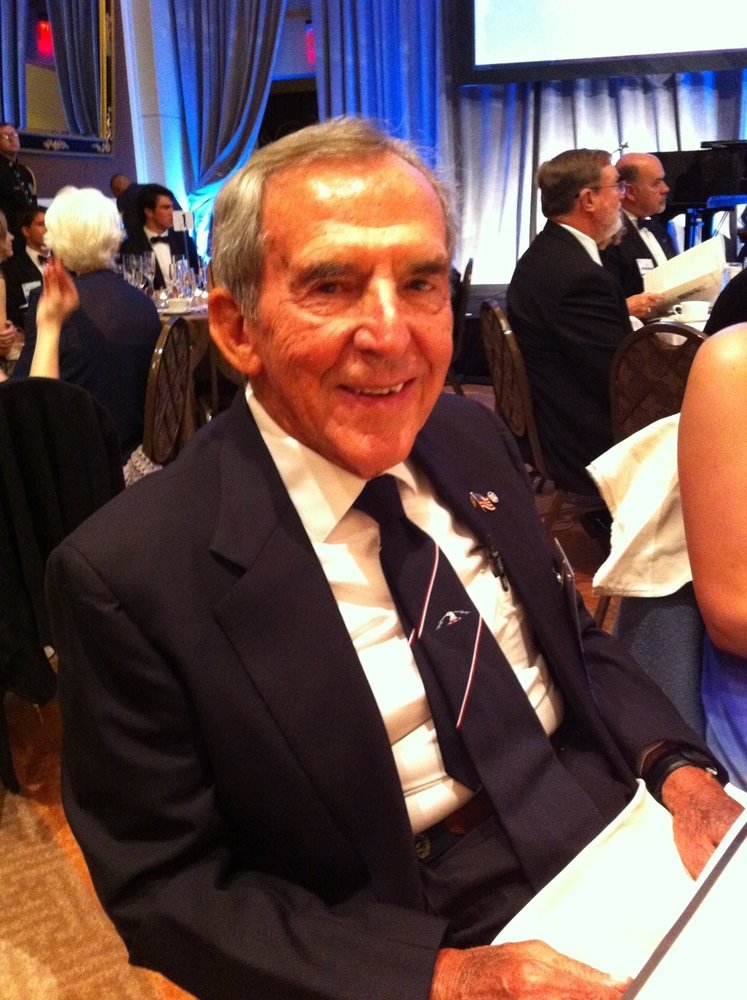 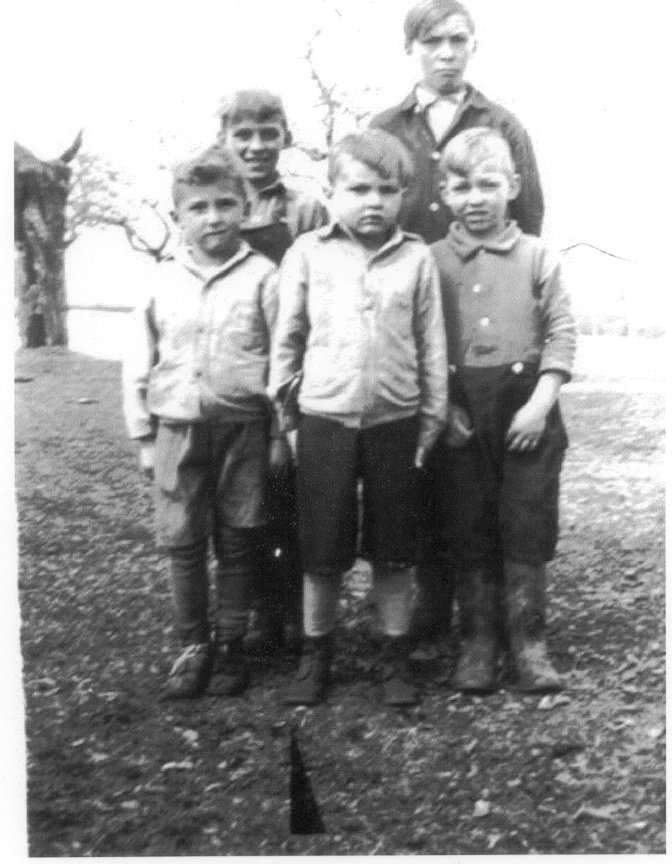 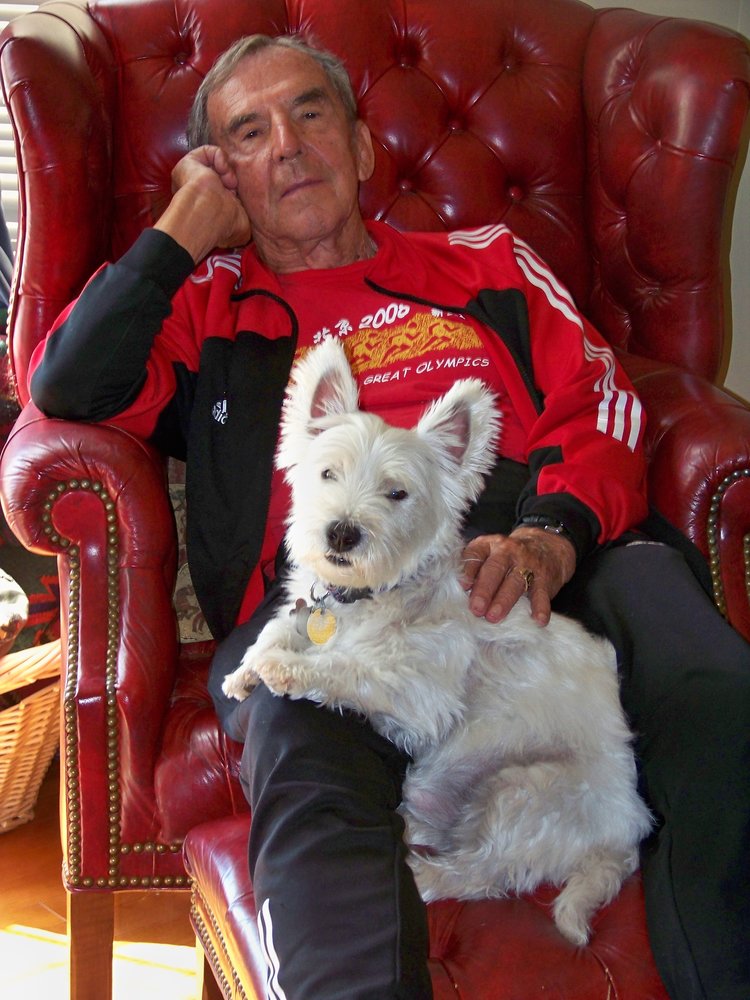 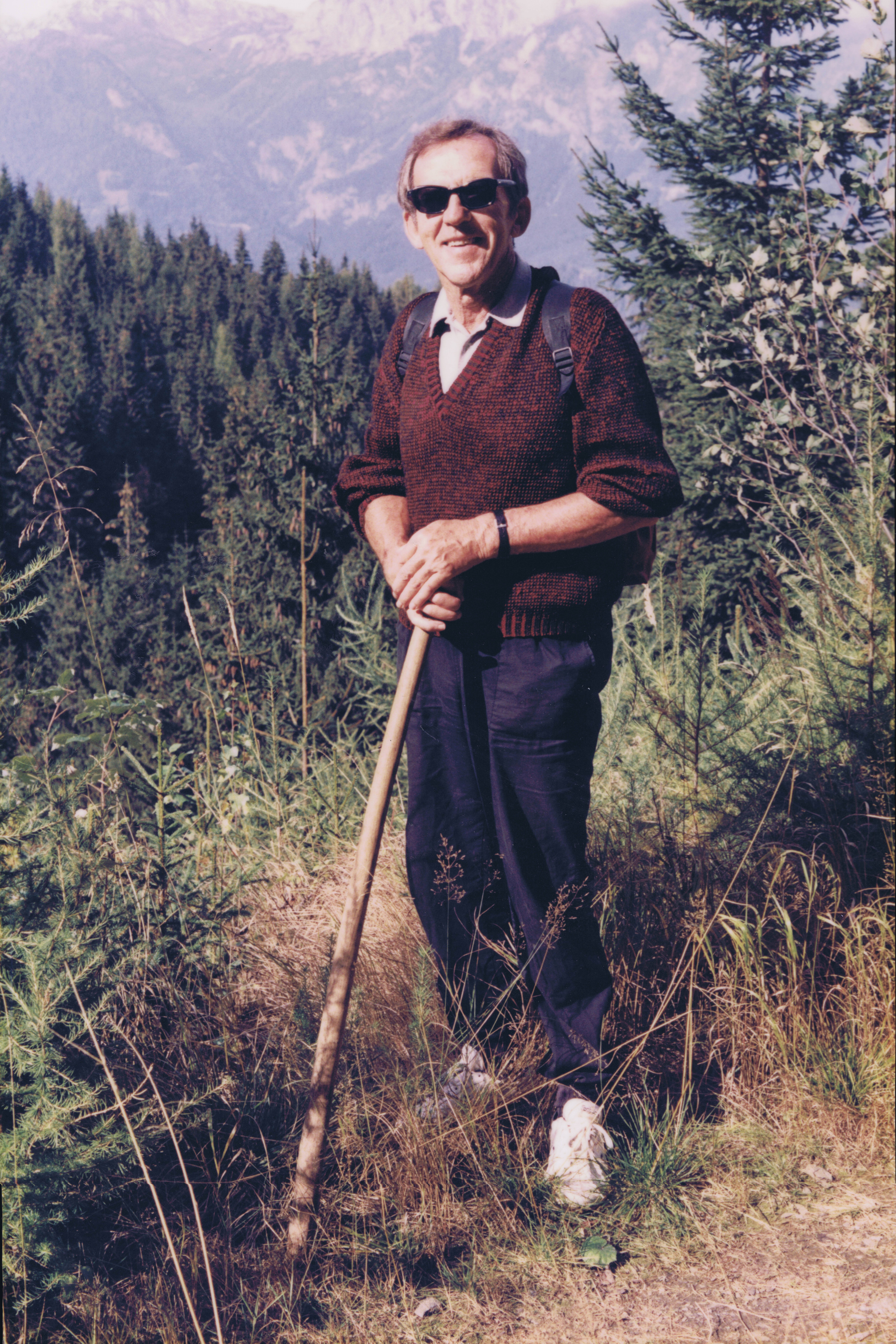 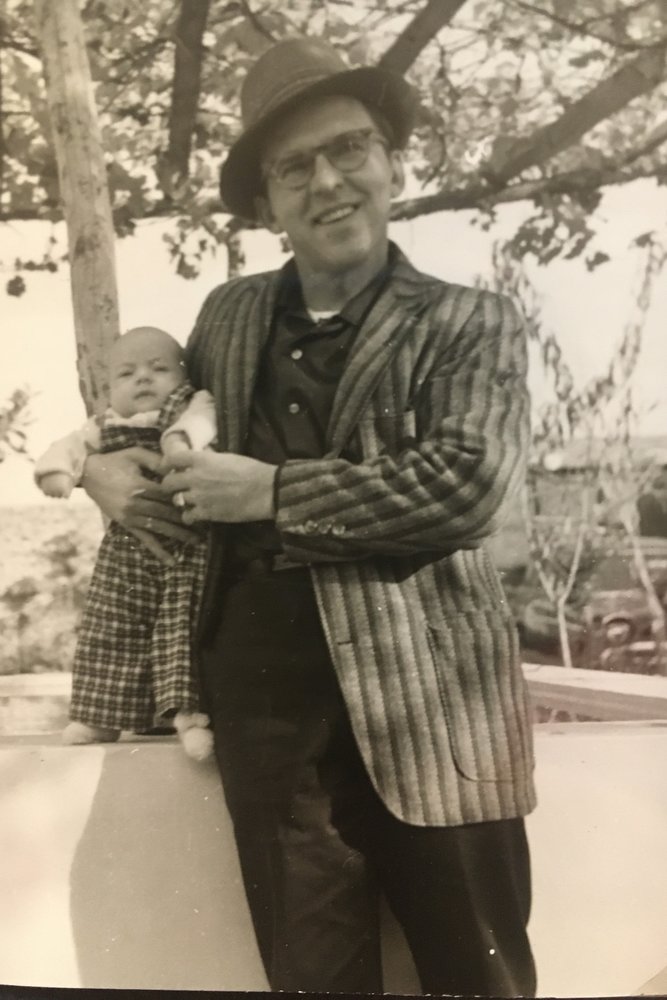 Died March 4, 2021 in Ashburn, VA at age 95. Born Oct. 31, 1925 in Sardinia, NY to John and Magdalena (nee Valentin) Reinhardt, Art was one of 18 children, 15 of whom survived early childhood. After leaving home at age 15, he supported himself by working on a neighboring dairy farm while also playing high school sports and completing his studies. He graduated Valedictorian from Sardinia High School in 1943.

In 1943, Art joined the Army Air Corps, training in communications in Scott Field, IL. In 1944 he was recruited by the Office of Strategic Services, and underwent advanced communication training at Area C, which is now part of Prince William Forest Park. Although his time at Area C was brief, he looked back on it fondly as an important point in his life.

Upon completing OSS training, Art was deployed to China, where he was assigned to the newly formed 5329th Air Ground Forces Resources Technical Staff (AGFRTS), a joint operation of the OSS and 14th Air Force to gather and transmit intelligence on the Japanese. Serving as a radio operator in forward substations, he received, transmitted and decoded radio messages to and from OSS Secret Intelligence teams and Special Operations teams behind Japanese lines back to the OSS main station in Kunming. His substation in Suich-uan survived regular bombing attacks and was eventually overrun by the Japanese Army in late 1944.

Art’s next assignment was as the radio operator and cryptographer on a two-man SI team near the front lines. The team had to live off the land, with no rations, mail, or pay. After becoming ill with recurrent fevers, he was relieved of field duty and joined the Salem operation at a sub-base near Shang-joa south of Shanghai. From there he encrypted and transmitted reports on Japanese ship movements. This operation resulted in the sinking of many enemy ships, including a 26-ship convoy which earned a commendation from Admiral Nimitz.

Art returned from China in December 15, 1945 and was discharged February 1946. He earned the Good Conduct Medical, American Theater Ribbon, Asiatic Pacific Theater Ribbon, and World War II Victory Ribbon; and in 2011 was awarded the Special Forces Tab. However, his illness continued after his service ended, and it wasn’t until several years later that he was finally diagnosed and treated for amoebic dysentery.

Following the war, Art took a temporary assignment with the Strategic Services Unit, the post-World War II intelligence agency that combined two OSS branches: SI and Counterespionage. In 1946 he went to Tehran to provide emergency communications for the beleaguered U.S. Embassy during the Azerbaijan Crisis. In 1947 he was temporarily assigned to Lima, Peru to take over the FBI network, and also provided emergency communications during the revolution in Ecuador.

In late 1947 Art became a charter member of the Central Intelligence Agency, where one of his first actions was to start a technical and operations communication school, which included maintenance, power generation, teletype, and cryptography.

In 1952 he was assigned to the Philippines to expand overseas communications network in Southeast Asia. Art left Hanoi at 8pm on April 30, 1954, shortly before the separation of Vietnam at the 7th parallel.

His next major assignment was building and running a very successful Signal Intelligence project in Iran targeted against Soviet IRMB and ICBM test ranges at Kapustin Yar and Tyrura Tam. He had to build the site from the ground up, including 30 houses, utilities, infrastructure, and an airfield. The intercepted signals permitted the decoding of Soviet telemetry and provided the intelligence community with most of the data available on the Soviets.

Art subsequently served several other overseas assignments including the Middle East and Cyprus, culminating with an assignment to London. While in London he was responsible for all communication facilities in the European bureau, including the Soviet Union, Soviet Bloc countries, and four north African countries, and served on a special NATO committee. Art was also a founder of the Diplomatic Telecommunications Service for the Department of State. His final assignment with the CIA was as Chief of Operations, Office of Communications. He retired March 1, 1976 and was awarded the Intelligence Medal of Merit.

A lifelong athlete, Art was an avid tennis player for whom no holiday was too sacred for a match; and regularly played golf well into his 90s. He was a HAM radio operator under call sign W4YT, as well as a Freemason and longtime member of the Arcade Lodge, Arcade, NY. Art was also fond of bluebirds, setting up houses on several local golf courses – an avocation he shared with his late brother Tony.

Art spent his later years helping to share and preserve the history of the OSS, and its innovative role in WWII. As one of the few remaining OSS veterans, he provided valuable input to a book commissioned by the National Park Services called OSS Training in the National Parks and Service Abroad in World War II, which was written by Rutgers Professor John Whiteclay Chambers II. But Art especially cherished his work with Prince William Forest Park on its OSS programs and exhibits. He gave several public talks at the old Area C camp over the years, his last one occurring in June 2019. In 2011, he was presented with the Distinguished Service Award by the OSS Society.

He is survived by his wife of 64 years Mildred (Levin) Reinhardt, son Bryan Reinhardt, daughter Mona Reinhardt, sister Rose Yoder, and legions of nieces and nephews and their children. He is also survived by the many cherished friends he gathered along his way. He was pre-deceased by twin brother Anthony (Tony) Reinhardt, brothers Adam, John Jr., Joseph, Lawrence (Larry) Frederick (Fritz), Robert (Bob), and George; sisters Ann Schuler, Helen Kohl, Edith Rakoska, Elizabeth (Betty) Hayes, and Kathryne DeNatale. He was also saddened by how many friends pre-deceased him.

Art’s last gift to his family was his meticulous pre-planning. Among other things, he met with the funeral home 2 years ago to give them all required information as well as strict written instructions, which included the following:

“My preference for a coffin is a simple pine box; if such is not readily available Shaker Pine will do. Checked with the cemetery and pine box coffins are acceptable.

Closed coffin, no viewing, furthermore no clean-up or make-up, do not clothe me, use a body bag and simply have the mortician comply with the minimal health standards. Do not even embalm, if that is not necessary. Burial should be private; family members only. Do not think a memorial service would be necessary as probably will not have many surviving friends. And no celebration of life; have been doing that every day. Want to go quickly and quietly.

I want to be buried at Quantico because I served in the OSS and was trained at what is now Prince William Forest Park, which is across the road from the cemetery. I’m indebted to the OSS because they gave me a career and made me forget I was ever in the military.”

His family will honor his wishes not to have a formal event, however they look forward to gathering with small groups of his friends for a drink or a meal to share stories.

There are several ways friends can honor his memory. In his last years, there were three things particularly important to him: his family, grand dogs, and his work on OSS history with Prince William Forest Park. In lieu of flowers the family suggests making a donation to one or more of the following:

Please do not select the featured charities on the donation page of this website.

Share Your Memory of
Arthur
Upload Your Memory View All Memories
Be the first to upload a memory!
Share A Memory
Send Flowers