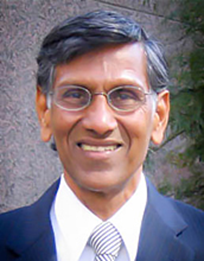 Please share a memory of Radhakisan to include in a keepsake book for family and friends.
View Tribute Book

Radhakisan S. Baheti was born in Mangrulpir, Maharashtra, India on Feb. 18, 1945, to Sohanlal and Narayani Baheti. He was the only brother to his three sisters, a devoted husband, and a loving father of three and grandfather of five. Dr. Baheti was the first person from his hometown to seek higher education in the United States. He received a B.S. and M.S. in Electrical Engineering in India from VRCE Nagpur, and from BITS Pilani, respectively. In 1970, he immigrated to America and earned an M.S. in Information and Computer Science from the University of Oklahoma followed by a Ph.D. in Electrical and Computer Engineering from Oregon State University, where he met his wife Padma.

Dr. Baheti worked for the Control Engineering Laboratory of GE Corporate Research and Development Center in Schenectady, NY for the first 15 years of his career. In 1989, he joined the National Science Foundation (NSF) as a Program Director in the Division of Electrical and Communications Systems, where he worked for the rest of his career. He received the "Distinguished Member Award" from the IEEE Control Systems Society and was elected a Fellow of the prestigious IEEE society in 1997. Dr. Baheti was a major figure in the field of Electrical Engineering and he had a huge, positive influence on the careers of thousands of people through his work at NSF. He pioneered funding for several fields including robotics, cyber-physical systems, and nanotechnology to name a few. Notably, he directed project funding for the development of fully automated, self-driving cars.

Dr. Baheti was an avid runner, a yoga practitioner and a voracious reader. With his first marathon in 1997 at the age of 52 (Marine Corps Marathon), he qualified for the prestigious Boston Marathon. He ran more than 25 marathons including in Boston and New York. At the age of 65, he ran the JFK 50 Mile, an incredible achievement. He was also a licensed pilot and adopter of new technology. Dr. Baheti travelled the world as part of his professional work and with his family.

Dr. Baheti was a spiritually advanced soul and one of the kindest, gentlest and wisest individuals. He was a mentor, guide, and source of strength to all his relatives in the US and India. He inspired many young minds in India (especially Mangrulpir) on the importance of health through his famous early morning Yoga classes. He organized vaccination drives for underprivileged people in Mangrulpir and surrounding areas to protect against disease. Dr. Baheti was a patient listener who would go the extra mile to help anyone.

Radhakisan married Padma in 1974. They have two daughters, Sheela Kathuria, Dr. Aparna Baheti, and a son Rajiv, all of whom could always look to their father for wisdom, guidance, and love. Radhaksian’s family includes many nieces and nephews, whom he nurtured and mentored to become successful individuals. He is fondly known as “Nanaji” by his grandsons (Deven, Ari, Harman) and granddaughters (Leela, Anika). Memorial contributions may be made at https://www.ekal.org/us/donate

Share Your Memory of
Radhakisan
Upload Your Memory View All Memories
Be the first to upload a memory!
Share A Memory
Send Flowers
Plant a Tree