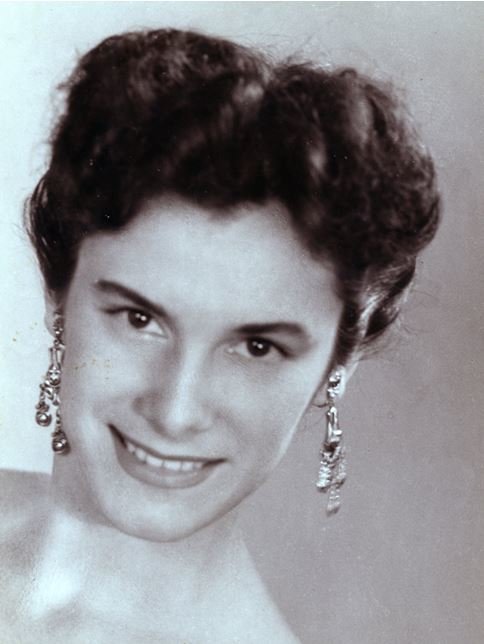 Maria Gyselda McCarthy (September 14, 1927-March 14, 2021) passed away at the age of 93. She was born Maria Gyselda (called Gyselda) da Fonseca on September 14, 1927, in Cachoeiro de Itapemirim, Espirito Santo, Brazil, to Maria Moreira Machado da Fonseca and Manuel Joaquim da Fonseca. Her family moved to Rio de Janeiro, Brazil where she grew up on Ipanema Beach. She became a ballerina and opera singer performing in The Theatro Municipal, which was the opera house in Rio de Janeiro, Brazil, as well as other countries in South America. Her favorite performance was as Violetta in the opera La Traviata.
In 1954, Francis James McCarthy (Jim), a Naval Academy graduate and future Air Force Pilot from the United States visited Rio de Janeiro and there he met Gyselda, a glamorous woman with a beautiful voice. Over the next two years he wrote her every day and they fell in love. In September of 1956, Gyselda journeyed to the U.S. where she married this love of her life and together they raised a family until Jim’s death nearly 60 years later. She was devoted to her husband, nursing him through his many illnesses. They were blessed with three daughters and nine grandchildren.
As a wife of an US Air Force officer, Gyselda developed new talents as hostess and seamstress. Together they were stationed in Spain, Germany and bases throughout the US, finally settling down in Northern Virginia. When stationed at the US embassy in Spain, she threw parties for guests like Ava Gardner and Princes from neighboring countries. She had bridge parties for wives of fellow officers and Christmas parties for all the neighbors on her street. As her family grew, she hosted all the holidays at her home. With the thrift required of a wife of a young officer, Gyselda learned to make the best of what she had by learning to sew. Growing up with a mother who was an accomplished seamstress, she never discovered her own talent until she began making clothes for herself and her daughters. She enjoyed recreating all the latest fashions for them as they grew up. When it was time for her first daughter to marry, she would sew a wedding dress so beautiful that many in her community marveled at her skill.
Gyselda’s family was her abiding joy. Raised in an extended family that sent her and her cousins to spend summers at her family’s ranch, she knew the strength and richness that comes from keeping the bonds of family strong. Throughout the years she traveled home to visit family in Brazil, keeping in touch with them and supporting her children’s relationship with them. Wherever she called home, she welcomed her daughters with their husbands and the grandkids, encouraging the forging of family bonds. It remained that way even on the day of her passing.
Gyselda's character was one of strength, love, and compassion. Her attitude towards the trials of life was always a positive one which enabled her to overcome them with grace and dignity. She encouraged people not to worry about their lives because she knew all would be taken care of by God. She welcomed people into her home as if they were family and helped those in need no matter who they were. She showed true love to those around her and touched their lives in a special way. Her love will never be forgotten.
She is survived by a brother Luiz Fernando da Fonseca; her daughters Marisa McCarthy Olszewski (Jeffrey), Janet McCarthy Puller (Duncan) and Denise McCarthy Mohler (Rigg) and nine grandchildren. She is pre-deceased by her husband Francis James McCarthy, sister Sylma da Fonseca and brother Jeronymo Machado da Fonseca.
A private Mass of Christian Burial with only immediate family will be held at St. Catherine of Siena Catholic Church in Great Falls, VA. Interment at Arlington National Cemetery will occur at a later date, beginning at the Old Post Chapel where we hope we can welcome extended family and friends to join us.

Share Your Memory of
Maria
Upload Your Memory View All Memories
Be the first to upload a memory!
Share A Memory
Send Flowers