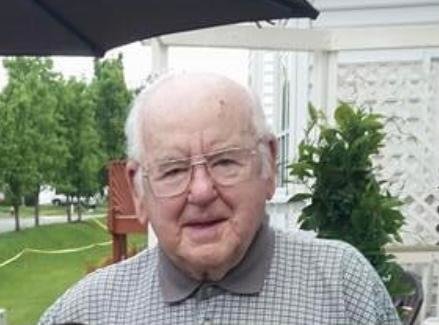 Ed graduated from The Southeast Catholic High School for Boys in 1950, and then served his country for four years as a member of the U.S. Navy during the Korean War.   After his time in the Navy, Ed attended  LaSalle College on the G.I. Bill and graduated in 1958 with a B.S. in Business Administration.

In 1959, Ed began his career in law enforcement with the Department of the Treasury.  Ed was a Special Agent with the Bureau of Alcohol, Tobacco, and Firearms.  Early in his career Ed spent time on special assignment as a U.S. Sky Marshal.  He thoroughly enjoyed his job with ATF which included in his words, “chasing moonshiners in Uniontown, PA., breaking up illegal gambling rings in New Kensington, PA., and making sure guns were legally registered from Pennsylvania to Maryland to Virginia.”  He made many lifelong friends in ATF and served as a mentor to many younger agents in his later years in the agency.  He retired from ATF in 1984.

In 1984, Ed began working as a security guard at The Catholic University of America in Washington, D.C.  By working at CUA, he was able to provide a free, Catholic college education for his wife and four children (all CUA grads).  Ed was assigned to the The Raymond A. DuFour Athletic Center.  Known for his friendly demeanor and willingness to shoot straight with anyone who walked in the gym, he was known affectionately to most who talked with him at CUA as “Big Ed.”  He served as a father figure to many and would often share a story or kind word to students, athletes, or coaches he encountered.  He retired from CUA in 1997.

Ed thoroughly enjoyed retirement and spent his time in a variety of ways.  A voracious reader, Ed was a regular at the library in Cascades and would bring home and finish five to six books in a typical week.  He was an avid outdoorsman and enjoyed nature; he spent much time as a serious angler and enjoyed feeding the birds outside of the kitchen window at his home in Sterling.  He attended countless family events including his wife’s orchestra concerts and his grandchildren’s events ranging from sports contests to plays to dance recitals.  Ed was a consistent supporter of the boys basketball and baseball teams at Broad Run High School and the volleyball team at Loudoun County High School.  He spent many days shooting pool at the Senior Center in Cascades and many nights and weekends fishing or camping at the Izaak Walton League in Leesburg.  Ed had the misfortune (according to his children) of growing up as a Philadelphia sports fan, and he was incredibly excited when the Eagles won the Super Bowl in 2018.  He also cheered for the Washington Nationals in his later years enjoying their World Series Championship in 2019.  While he would sometimes lament both teams’ poor performances in other years, he was always a loyal fan of both organizations.

Survivors include:  the love of his life and wife of 54 years, Rosella, his four children, Edward Jr. (Maureen), Sue Anne, Patrick (Jennifer), and Kathleen, his five grandchildren, Riley, Conor, Erin, Megan, and Tyler, his sister Noreen (Charles) Cheleden, as well as numerous nieces, nephews, and friends.  He was predeceased by his father, Francis, mother, Agnes, and brother, Franny.

Viewing will be at the Adams-Green Funeral Home in Herndon, VA on Sunday, June 20, from 3 PM until 6 PM. Funeral Mass will be at Our Lady of Hope Roman Catholic Church in Potomac Falls, VA on Monday, June 21st at 11 AM with interment to follow at 12:30 PM at Chestnut Grove Cemetery in Herndon, VA.