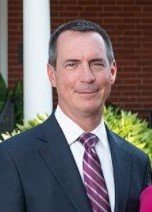 Chris spent most of his life in Herndon. He graduated from Herndon High School in 1983 and Virginia Tech in 1987. Chris graduated with honors from the Cincinnati School of Mortuary Science in 1990. He worked for several years with the Everly Funeral Homes and became the manager of the Falls Church facility in 1996. In 1997, J. Berkley Green hired Chris to work at Green Funeral Home in downtown Herndon. After Mr. Green passed away in late 1998, Chris and Kathryn became the owners of the Adams-Green Funeral Home in 2000. Chris’ passion was serving the families of Herndon in their time of need in a compassionate and caring manner. His gift was dealing with people in difficult times.

Chris was an active member of the Herndon Rotary Club and was an extremely proud Washington Capitals fan, especially in 2018 when he witnessed the Stanley Cup victory. In his spare time, Chris volunteered as a coach for youth soccer, basketball and baseball. You could often find Chris, a devoted hockey and soccer Dad, with Kathryn cheering on their sons, Jack and Daley, at ice rinks around the country, as well as their daughter Susanna at various soccer fields throughout the U.S. He enjoyed golf in his free time and played in a golf league on Thursdays at the Herndon Centennial Golf Course for several years. During the height of the COVID-19 pandemic, Chris discovered boating and exploring the Potomac and Chesapeake Bay. Chris loved Jazz and Country music as well as attending concerts of all kinds of music. He enjoyed trying new cuisines and sampling craft cocktails and beers, eating Doritos and Oreos, and playing cards with friends.

Chris loved traveling with family all over the world. Israel and Gibraltar were the highlight of Chris’ travels. Chris was a devoted attendee of Bible Study Fellowship International completing eight years of the 10-year Bible study. Chris was an active member of the McLean Bible Church where he and his family were able to recently participate in a mission trip to Ethiopia. It was on this trip that Chris discovered the Selamta Family Project, a program which brought orphans into small forever families. Chris has also been a strong supporter of Rotary International, Foundation for Fighting Blindness and many other charities seeking to serve the underprivileged and unreached people groups.

Chris was someone who operated quietly behind the scenes. He was referred to by many as a good listener and will be remembered most for his kind, gentle nature, constant patience, and loving devotion to his family and faith.

In lieu of flowers, memorial donations may be made to the American Tinnitus Association at https://ata.org, Foundation Fighting Blindness at https://donate.fightingblindness.org and the Selamta Family Project at www.selamtafamilyproject.org.

Please join his family in the celebration of his life:

Share Your Memory of
Christopher
Upload Your Memory View All Memories
Be the first to upload a memory!
Share A Memory
Send Flowers
Plant a Tree