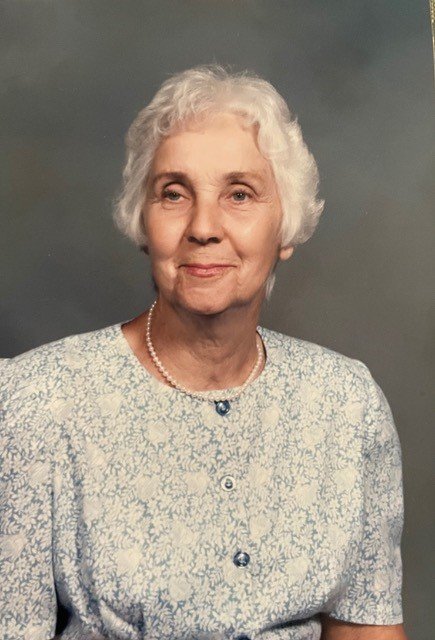 Rosemary Trone Lewis, teacher, wife, mother, grandmother, and great grandmother, who deeply loved her family, her students, and her faith community, died on July 22, 2021 at the age of 97. She lived a long and faith-filled life.

Rosemary was born on November 9, 1923 in Washington D.C. to Earle K. Trone and Ruth Witz Trone. She grew up in Arlington Virginia, in Clarendon, where she met her future husband, Robert M. Lewis, who also lived in the same neighborhood. Rosemary and Bob became friends in kindergarten and their families attended the same church, Clarendon United Methodist, where she was baptized. Both attended Washington-Lee High School, where their friendship grew into something more after Bob asked Rosemary to the Senior Prom. Rosemary and Bob both graduated from W-L in the spring of 1941.

During high school, Rosemary could be seen on the clay courts at the corner of Glebe Road and Wilson Boulevard playing tennis, or at one of the softball fields in and around Arlington, when she played for the Arlington Aces, or riding her bike through the hills of Arlington Cemetery. Later on in life, Rosemary could also be seen skimming across the water on the Potomac River; waterskiing at her parents’ home at Hallowing Point.

Rosemary’s father helped instill in his daughter a love for sports and physical fitness and often took her to see professional football games in Washington DC. She became an avid Washington Senators and Nationals fan, and enjoyed living to see the first World Series win for her team in her lifetime, when she was 95.

As a teen, Rosemary was active in Job’s Daughters, a Masonic-affiliated youth organization whose mission is to create confident young women, respecting tradition, while shaping the future.

It was no wonder then, that Rosemary harnessed all that energy into a Physical Fitness and Health Sciences degree at George Washington University, in Washington DC. She graduated in 1945.

During her college years, after her future husband went to the Pacific in World War II, Rosemary did her part to support the war effort by keeping up a steady written correspondence to him, her friends, and other soldiers and sailors who were stationed in Europe and the Pacific.

Rosemary returned to Washington-Lee to do her teacher training, while finishing up her degree at GW. When the war ended, Bob returned to Arlington and he and Rosemary were married at Clarendon United Methodist Church on September 14th, 1946. They were married for 41 years, until his passing in 1987.

Rosemary began her P.E. and Health teaching career with Arlington County Public Schools at her alma mater, Washington-Lee, followed by teaching assignments at Thomas Jefferson Junior High, Williamsburg Junior High, Kenmore Junior High, and Walter Reed Elementary School. She also coached the cheerleading squad at the junior high and high schools where she taught, and is fondly remembered by many of her former cheerleaders. As one wrote upon hearing of Rosemary’s passing: “Mrs. Lewis always had a special place in my heart.”

Rosemary and her husband were active W-L alums, and as a team, took on the organization of several of their high school reunions, including their 45th in 1986. She attended her 70th reunion at W-L in 2011, escorted by one of her sons. Her husband was there in “school spirit.”

Rosemary was a faithful member of Clarendon United Methodist Church for over 64 years, where she taught Sunday School, helped with Adult programs, and volunteered for other church activities, such as the Church Kitchen, where she enjoyed serving lunch to the those in need in the community. She continued to attend church services, and her volunteer activities at Clarendon United Methodist Church, well after she relocated to Loudoun County VA to be closer to family, and maintained a relationship with some of her fellow members throughout her lifetime.

Mrs. Lewis added to her spiritual community when she became involved in various community outreach initiatives at Galilee United Methodist Church, after she moved to her new home in Sterling, Virginia. She supported many of the church’s activities, as well as their mission work. Rosemary especially enjoyed being in the church office, helping out with correspondence and other service and fellowship responsibilities, and made many long-lasting friendships over the more than thirty years that she attended church services there.

There will be a Memorial Service for family, friends and loved ones, on Sunday, August 15, 2021 starting at 3:00pm at Columbia Gardens Cemetery in Arlington Virginia. Mrs. Lewis will be laid to rest with her husband Bob, where she will be close by her parents, her mother and father-in-law, and her brother and sister-in-law’s graves.

Rosemary loved flowers and she loved her church. The Lewis family requests that all floral gifts be in the form of a donation to the Galilee United Methodist Church’s “Altar Flowers Sponsorship Program.”

Share Your Memory of
Rosemary
Upload Your Memory View All Memories
Be the first to upload a memory!
Share A Memory
Send Flowers