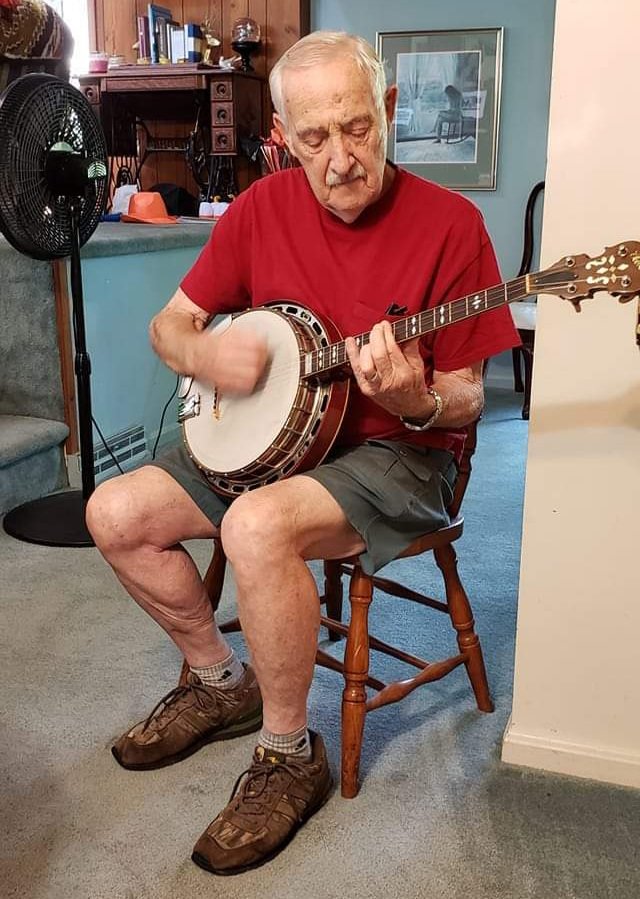 "Ladies and Gentlemen! May I have your attention, please?! My name is Mike Trader and I will be your entertainment this evening so sit back and enjoy the show!"

....and what an entertainer he was!

Singing, skating, dancing, giving a presentation, lectoring at church, making a sales pitch, harmonica, ukulele, his beloved banjo, and of course, his keyboard. If Mike had an audience, they were sure to be entertained.....and he was in his most natural and happiest place to be. Music and the stage (in whatever form it took....even just a gathering of family) were his life blood. Even when his mind began to fade, his music was ever present. Words were lost but the notes remained. His fingers on the keyboard would still weave a beautiful musical tune. Turning on the radio would still have him dancing a waltz. Of course, there were many other facets to Mike's never boring life.

Born in 1935 in Wisconsin (anyone up for some Leon's frozen custard?) to Roy and Margaret, he grew up alongside his sister Joan and brother Barry. Living on the river, he became an expert swimmer . A skill that would later earn him a college scholarship (oh, the stories of fraternity life that he would tell!). He even went on to become an avid roller skater....both for competition and shows. Life and the Army eventually brought him to skating at the Tacoma Bowl in Tacoma, Washington....a skating rink that also happened to have been frequented by a particular brunette. Mike was absolutely smitten....and who wouldn't be...she was beautiful (and one heck of a skater, too)! The brunette, Jean, would later become his wife. Boy....what a love story they had!

Over 60 years of marriage. They had five children....David (Midge), Gerry, John (who waited patiently in heaven to see his Dad again), Mark (Susan), and Kim (Randy). They also had five grandchildren....Theresa, Debbie, Michael (his namesake), Nicholas, and Anna. The years saw many adventures. Canoeing (ice on the gunnels make for a cold canoe race), kart racing (he won the first kart race ever run at Summit Point) , hunting (gun and bow...every October up on Jack Mountain....and even out his bathroom window), and running a videography business after Mike retired from his many years in Washington, D.C. (a daily commute that Mike and Jean would make together on their motorcycle) with the Postal Service.

Sadly, however, all shows must come to an end. On August 14th, 2021, with his family in the front row, Mike took his final bow and the curtain closed on a life that was lived to its fullest. Almost exactly two weeks (to the hour) prior, Jean went to be with our Lord....and theirs was not a solo act. True love is never parted forever....and so Mike soon followed his beloved Jean. While we will miss him terribly, Mike and Jean are happily together again...this time, for eternity.

As with all good actors, Mike's timing was impeccable. His body will be reunited with Jean's on their 61st wedding anniversary....Friday, August 20th, 2021. There will be a Funeral Mass that morning at St. Catherine of Siena Catholic Church, 1020 Springvale Rd., Great Falls, VA at 10 a.m. and a final curtain call at Arnon Cemetery in Great Falls immediately following. Please join us!

In lieu of flowers or applause (ok....maybe a few applause), Mike sure would love for a donation to be made to the Virginia Citizens Defense League, Inc. (vcdl.org).

Share Your Memory of
Michael
Upload Your Memory View All Memories
Be the first to upload a memory!
Share A Memory
Send Flowers
Plant a Tree