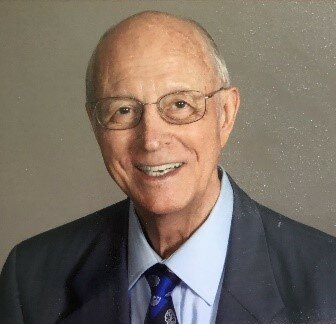 Lowell was born in Redfield, South Dakota, graduated from Huron High School, and attended the Air Force Academy, where he met Sandra Sorenson.  They married after he graduated from the Academy in 1961.  He spent 24 years in the Air Force, primarily tactical airlift (C-123s & C-130s) flying missions in the Dominican Republic (1964), Pakistan (1965), and two tours in Vietnam (1963, 1965-1966).  He then earned a master’s degree in computer science at Texas A&M University, followed by a Pentagon tour working in command and control (1971-1975).  Their favorite assignment was a four-year tour in Germany, where he was a C-130 Squadron Commander (1977-1980).   He attended the National War College (1982), followed by a tour in Studies and Analysis, Pentagon.   Lowell retired from the Air Force in 1985 and then worked as a contractor in the Pentagon, retiring again in 1997.   Lowell and his wife, Sandy, bought an Airstream trailer in 1975 and another in 1999, in which they enjoyed travelling together throughout the United States for over 38 years. They moved to Falcons Landing in Sterling, Virginia in 2011.   He was a volunteer and the coordinator of the Home Delivered Meals (Meals on Wheels) program at Falcon’s Landing.  He also was a board member of the Military Officer’s Association of America (MOAA) Chapter at Falcon’s Landing.  Lowell was an active member of Community Lutheran Church in Sterling, Virginia.

Lowell lost Sandy, his wife of 56 years, to Alzheimer’s in June 2017 and is survived by two sons, Lance and Kevin and his wife Nicole, and five grandchildren:  Brennan, Logan, Caelyn, Joshua, and Shannen.

To watch a livestream of the service on Saturday, September 25th, please use the following link: https://youtu.be/NQQoNhN800Y

If you wish to donate in his memory, you can access the Alzheimer’s Association at https://www.alz.org/ for helpful information.

Share Your Memory of
Lowell
Upload Your Memory View All Memories
Be the first to upload a memory!
Share A Memory
Send Flowers
Plant a Tree