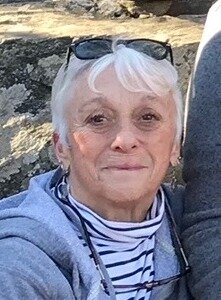 Roberta F. Kennedy passed on peacefully in her home surrounded by her family on September 23, 2021 after a yearlong illness.  Bobbie, as she was known by her friends and family, was born in Northampton Massachusetts on October 2, 1944 to her parents Mary E. (McCool) and Robert F. Ryan.  She graduated from St. Michael’s High School in Northampton in 1962 and went on to graduate from Lowell General Hospital School of Nursing in 1965.  She met Richard J. Kennedy in high school, and later married him on June 25, 1966. They had a long happy marriage and he will miss her dearly.  She was a loving and proud mother of three children. They are Roberta A. Milliken married to Rick; Richard R. Kennedy married to Monica; and Patrick M. Kennedy married to Jessi. She was fondly known as Nanny to her grandchildren, Alexandra A. Milliken, Christopher A. Milliken married to Margaret, Jackson T. Kennedy, Lily Kathleen Kennedy, Emma June Kennedy and Mary Ryan Kennedy, and her great grandson William A. Milliken. She is also survived by her brother Thomas Ryan, and sisters Mary Elizabeth “Mamie” Labelle and Kathleen Baye, their spouses and many nieces and nephews.

After a brief stint living in New York City, where she worked as an RN, Richard joined the Marine Corps and as a result they lived in several places over the next three years. While Richard was in Vietnam she cared for her two young children while awaiting his safe return. Soon after his return they moved to Buffalo, New York where they lived from 1970 to 1976. In 1976 they moved to Reston Virginia and lived in Soapstone Cluster until 1987 when they moved to Waterview Cluster on the Lake Anne side of Reston where they would remain.

Bobbie began her nursing career in New York City and then paused to raise her young children. When Patrick, the youngest, started school she returned to work at Terraset Elementary as a school nurse and administrative assistant for several years. After that she dedicated herself to psychiatric nursing for over twenty years at Springwood and then at Graydon Manor before retiring.

Bobbie was an avid reader who shared many books with her friends and family. She was an excellent cook who loved to try out new recipes in addition to preparing family favorites.  Her children and grandchildren will miss calling her on the phone to get her culinary advice but will continue to share the family standards. Bobbie was active in her community particularly in Waterview Cluster where among other things she served as Secretary of the Board. Bobbie always had beautiful flower pots in front of her house in addition to a wonderful patio garden in the back where many hours were spent sharing conversations and laughs with friends and family. She continued to expand her horizon by reading books, watching PBS News Hour, reading the Washington Post and New York Times up to her last days. She was always willing to speak up and stand up for what she believed.

Bobbie was a good friend to many.  One friend recounted that she looked out for their youngster in the neighborhood, and one time the toddler snuck out their back door and was coming across the bridge behind their house and was promptly returned home with a smile. Although she was not a dog owner she befriended the neighborhood dogs. Another friend wrote in a note “Throughout the many years, her small and large selfless deeds, her acts of kindness and unconditional love were writ large in our lives.”

Bobbie and Richard enjoyed exploring the world together. She was fortunate enough to travel with Richard both across the country and abroad over the last twenty years. They enjoyed hikes along the Potomac River, museums, cultural celebrations and art festivals, especially the Reston Art Festival.

She loved the beach and her family.  To that end she enjoyed the 25-year tradition of family beach week.  She and her whole family would meet at a house on the beach for one glorious week, every summer.  There would be hours spent on the beach, sitting in beach chairs, soaking up the sun and enjoying the ocean. Her last week at the beach was in June of 2019, due to the pandemic. Her family will continue to feel her presence at family beach trips to OBX in the coming years.

Bobbie will be missed greatly by her friends, family and mostly by her husband, Richard. Her life will be celebrated at St. Thomas a Becket Catholic Church on October 6th at 11:00 with a reception to follow. She will be buried in Arlington National Cemetery at a later date.  In lieu of flowers please donate to Cornerstone.

Share Your Memory of
Roberta
Upload Your Memory View All Memories
Be the first to upload a memory!
Share A Memory
Send Flowers