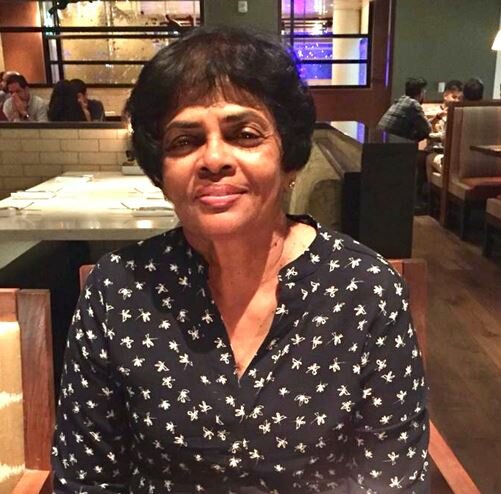 Jasmin Chitraleka (Chitra) Arulgnanendran, age 70, died peacefully surrounded by her son, daughter and husband on Friday, November 19, 2021 at her home in Fairfax, Virginia after a courageous battle with cancer.

Jasmin was born on September 28, 1951 in Colombo, Sri Lanka and was the fifth child of Mary Regina and Manualpillai Joseph Vethanayagam. She was a Pre-School Teacher at Imagination Learning Center in Chantilly, Virginia. Jasmin graduated from Holy Family Convent, Bambalapitiya and earned her Diploma in Pre-School Education from the University of Sri Lanka, Colombo. In addition to living in Sri Lanka and the United States, Jasmin also lived in Oman, England and Jamaica. Prior to moving to Virginia, Jasmin lived in Las Cruces, New Mexico for several years.

Jasmin lived life to the fullest and had an adventurous spirit. She treasured spending time with her family and friends. She loved to travel, try new restaurants and was a big fan of musicals. She also loved watching classic Tamil movies, tending to her plants, journaling and doing needlework.

Family and friends are invited to her funeral mass on Saturday, November 27 at 10 am at St. Timothy Catholic Church in Chantilly, Virginia. Afterwards, her interment will take place at Fairfax Memorial Park. There will also be a visitation on Friday, November 26 from 5 to 8 pm at Adams-Green Funeral Home in Herndon, Virginia. Online condolences may be sent to https://adamsgreen.com/tribute/details/12377/Jasmin-Arulgnanendran/condolences.html#content-start

Share Your Memory of
Jasmin
Upload Your Memory View All Memories
Be the first to upload a memory!
Share A Memory
Send Flowers