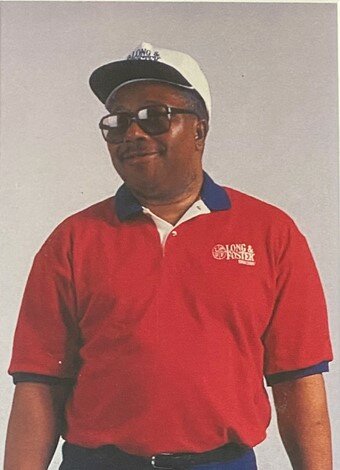 A private family viewing will take place at Adams-Green Funeral Home on Tuesday Jan. 4, 2022 from 11am-12pm Masks will be required to be worn over the nose and mouth of attendees.

Everyone is invited to join the family for the outdoor graveside service at Pleasant Valley Memorial Park at 1:30pm on Tuesday, January 4, 2022.  Directions available at the bottom of this page.

Francis Marshall Brown, age 78, of Washington, District of Columbia, passed away on December 17, 2021 in Reston, Virginia.

Francis Marshall Brown was born in Washington, District of Columbia, at Freedmen’s Hospital (now Howard University Hospital) on November 11, 1943 to Joseph Marshall Brown and Catherine Josephine Brown, née Wooden, both of Vienna, Virginia. He was baptized as a young man in Difficult Run Creek by the historic Cartersville Baptist Church, Vienna, Virginia, and later served on the church’s trustee board.

Francis was very much a self-made man who worked hard to support his family; in 1964, he began a thirty-year career of public service at DC Water (WASUA), advancing through several consecutive positions (including being hand-picked for promotion more than once by management staff) before retiring in 1994 as a general foreman. During his tenure at DC Water, he was twice awarded the Key to the City of Washington, DC by the US Congressional Commission for the District of Columbia for exceptionally meritorious and perilous service; from 1996 to1998, he returned to DC Water as a contracted consultant from O’Brien and Gere Engineering Company, and then went to work for Long and Foster for 13 years; his strong and steady work ethic was augmented by his reliability and loyalty, not only to his employers but to his family, loved ones and friends whom he cherished, and who could always count on him for support.

Francis was an avid bowler and was also an exceptional pitcher at baseball, playing both sports in various teams and leagues; he was also a sharply dapper dresser, always keeping his best appearance outward as an expression to others of giving his 100 per cent best effort. Francis would often show his love for his family and friends through his virtually limitless hospitality and his immense talent for cooking; family and friends could come to his house reliably expecting, without surprise, a meticulously clean and comfortable place to sit and relax, a delicious - smelling meal on the stove with an invitation to stay for dinner, a polite drink, and a warm and often boisterously friendly conversation about the social and political events of the day, the latest in sports, or a genuine inquiry into his visitor’s well-being, with the offer of advice and support if times were not the best. Adding the perfect ambience to the visit would be a sports team’s performance on the television in the background (and often it would be of his favorite football team, the Dallas Cowboys), or perhaps on the stereo, the melodic strains of Bloodstone’s “Never Let You Go” (one of his favorite songs), along with the Piedmont and Chicago blues, R&B, funk, and Detroit soul that he so enthusiastically enjoyed and often shared with others. But while Francis was an open book of hospitality and comfort, he also spoke the truth when needed and did not suffer fools gladly; his lack of pretense combined with his mindset of being direct remained one of his most enduring and ultimately endearing qualities: he was never mysterious or hard to figure out. We will miss him, our beloved husband, father, father-in-law, grandfather, great-grandfather, brother, brother-in-law, and friend, and hope to see him again in God’s time.

The family expresses its heartfelt gratitude to all who are here today in remembrance.

Share Your Memory of
Francis
Upload Your Memory View All Memories
Be the first to upload a memory!
Share A Memory
Send Flowers
Plant a Tree